Bernie did not "approve this message" and it wasn't created by a marketing firm - it was put together by a private individual. Just brilliant and so damning to the corporate media.

Posted by Vlad No comments:

There we were, on our usual stroll through the neighborhood, when we stumbled upon this safe. It looked the same as in the picture below, sans the stickers. It was in one piece and locked, but obviously discarded for some reason and left on the curb for anyone to pick up. If they could pick it up that is - that bitch is heavy! 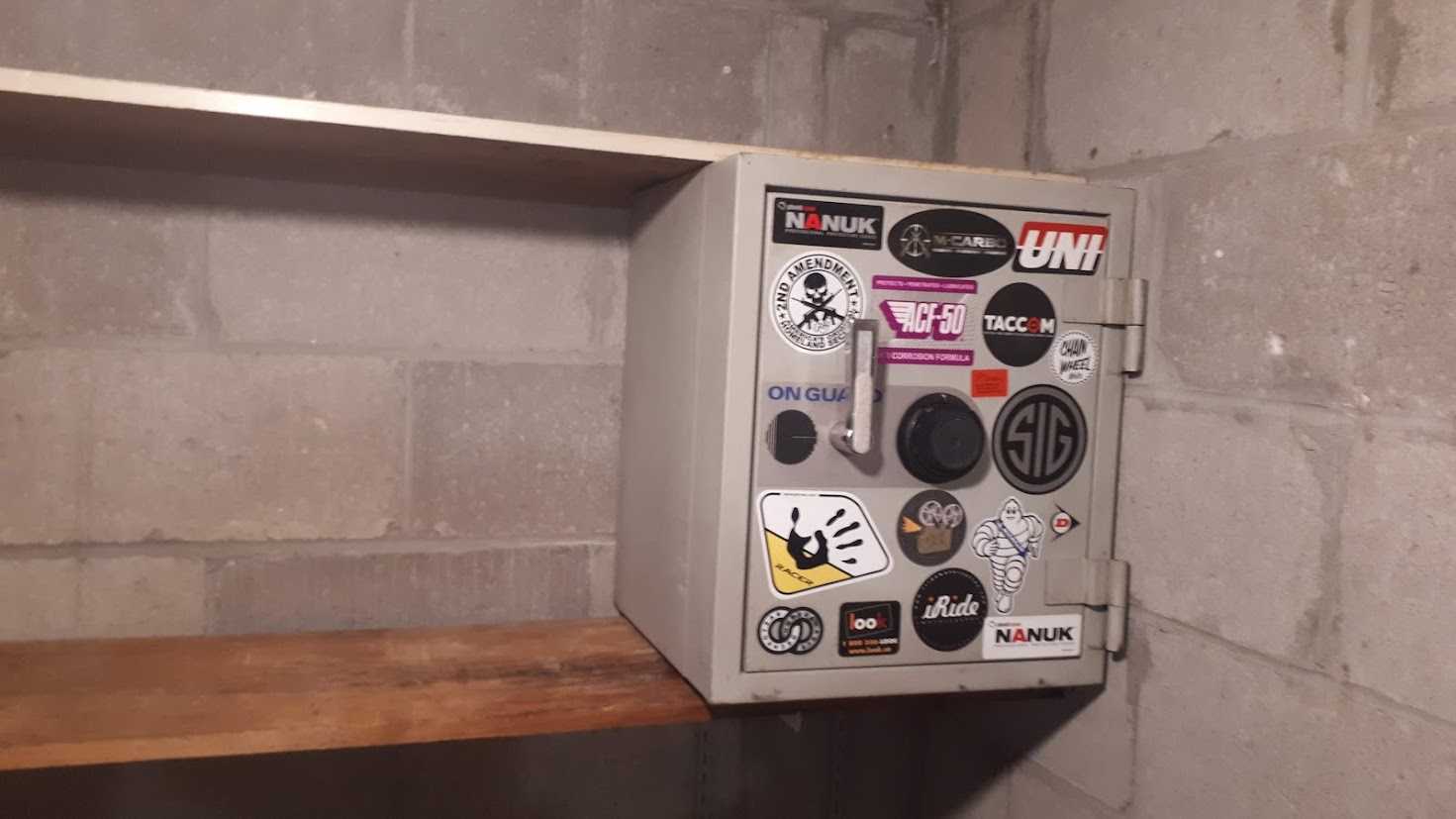 I had to bring the car even though it was less than half a block away from our house - it's that heavy. I examined it and found it's in pretty good shape and didn't look busted. I then spent a couple of days researching the manufacturer and type to find out how to open it. Watched a few good videos on safe cracking and spent an afternoon turning the dial with the stethoscope firmly lodged in both ears. No sound whatsoever was coming out of that safe apart from a hiss produced by the dial turning. No clicks, no ticks, no ratcheting, no squeaks, and no tactile feedback either. I eventually gave up and decided to put it back on the curb, but not before I try to open it using more destructive methods :). For starters, I removed the back plate, expecting to find nothing but steel and concrete (the damn thing is built of steel and concrete, that's why it's so heavy). To my surprise, here's what I found: 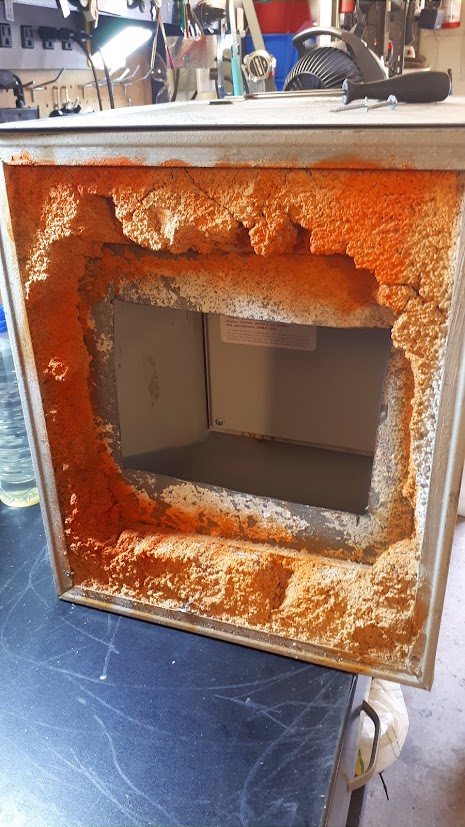 Someone had done the destructive penetration already! As far as I can deduct what happened here, previous owners forgot the combination and called the locksmith to unlock it for them. The locksmith decided it's much easier to cut it open than to try to crack the combination, but he did it quite professionally by cutting a clear hole in the back. They took whatever was in the safe and tossed it to the curb. So that's it - this safe is now just heavy piece of junk. Not so fast!

The hole was big enough for me to reach inside, unscrew the plate that covers the lock mechanism, disassemble the lock and open the door. 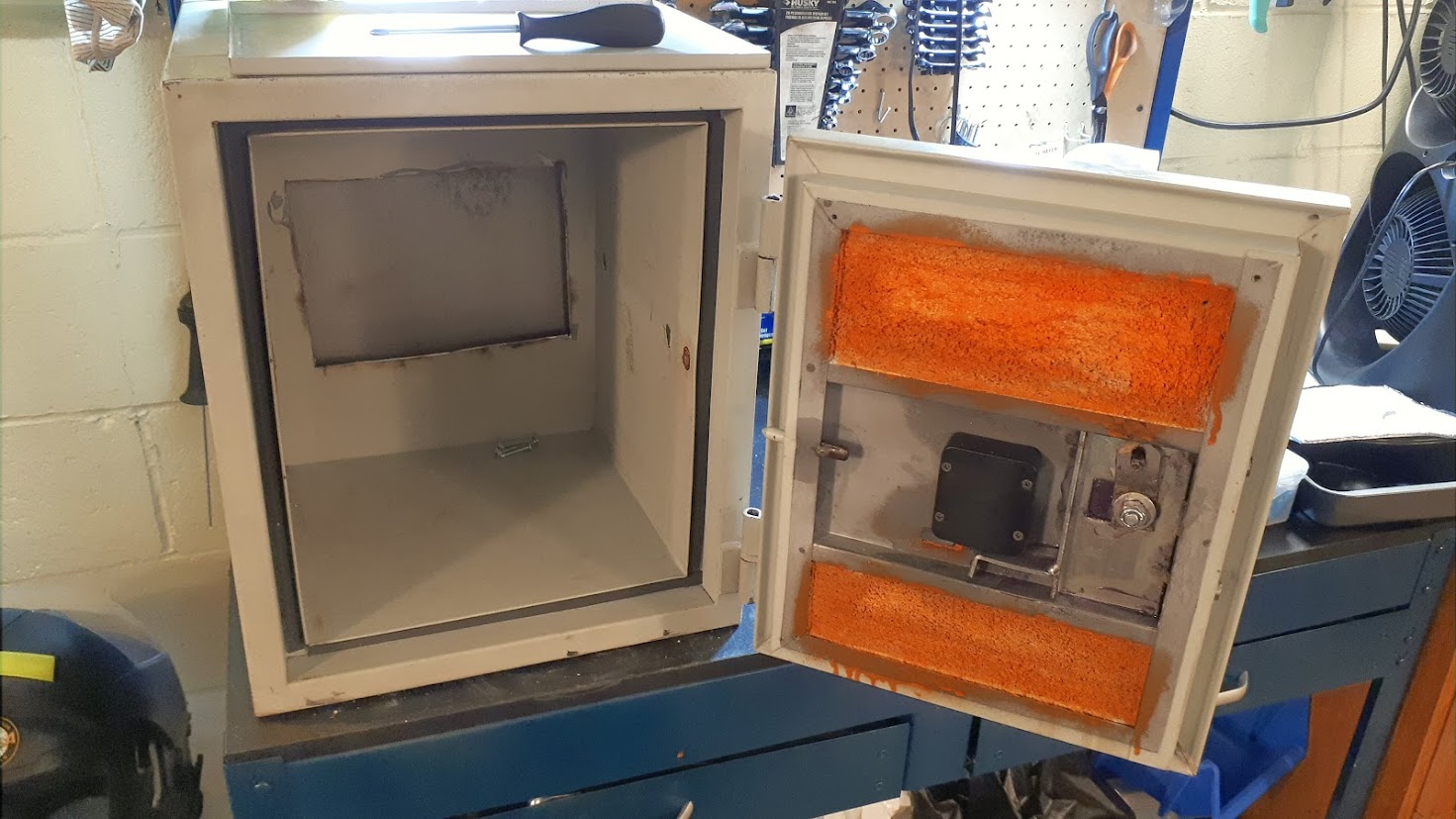 From this point it was easy. I changed the combination, reassembled the lock, lubricated everything nicely and made a couple of enhancements to bolts and levers. The only thing remaining was to close the hole on the back of the safe, so I screwed a steel plate from the inside, poured concrete and put the back plate back on. Then I permanently bolted it to the walls of the house :).

A safe like this would easily cost us $1,000 and we certainly don't have enough valuables to justify that kind of expense. This way I got it for free while learning everything about its inner workings. Very cool, if you ask me.
Posted by Vlad No comments:

“I’m a modern man, a man for the millennium. Digital and smoke free. A diversified multi-cultural, post-modern deconstruction that is anatomically and ecologically incorrect. I’ve been up linked and downloaded, I’ve been inputted and outsourced, I know the upside of downsizing, I know the downside of upgrading. I’m a high-tech low-life. A cutting edge, state-of-the-art bi-coastal multi-tasker and I can give you a gigabyte in a nanosecond!
I’m new wave, but I’m old school and my inner child is outward bound. I’m a hot-wired, heat seeking, warm-hearted cool customer, voice activated and bio-degradable. I interface with my database, my database is in cyberspace, so I’m interactive, I’m hyperactive and from time to time I’m radioactive.

Behind the eight ball, ahead of the curve, ridin the wave, dodgin the bullet and pushin the envelope. I’m on-point, on-task, on-message and off drugs. I’ve got no need for coke and speed. I've got no urge to binge and purge. I’m in-the-moment, on-the-edge, over-the-top and under-the-radar. A high-concept, low-profile, medium-range ballistic missionary. A street-wise smart bomb. A top-gun bottom feeder. I wear power ties, I tell power lies, I take power naps and run victory laps. I’m a totally ongoing big-foot, slam-dunk, rainmaker with a pro-active outreach. A raging workaholic. A working rageaholic. Out of rehab and in denial!

But, I’m feeling, I’m caring, I’m healing, I’m sharing-- a supportive, bonding, nurturing primary care-giver. My output is down, but my income is up. I took a short position on the long bond and my revenue stream has its own cash-flow. I read junk mail, I eat junk food, I buy junk bonds and I watch trash sports! I’m gender specific, capital intensive, user-friendly and lactose intolerant.

I bought a microwave at a mini-mall; I bought a mini-van at a mega-store. I eat fast-food in the slow lane. I’m toll-free, bite-sized, ready-to-wear and I come in all sizes. A fully-equipped, factory-authorized, hospital-tested, clinically-proven, scientifically- formulated medical miracle. I’ve been pre-wash, pre-cooked, pre-heated, pre-screened, pre-approved, pre-packaged, post-dated, freeze-dried, double-wrapped, vacuum-packed and, I have an unlimited broadband capacity.

I’m a rude dude, but I’m the real deal. Lean and mean! Cocked, locked and ready-to-rock. Rough, tough and hard to bluff. I take it slow, I go with the flow, I ride with the tide. I’ve got glide in my stride. Drivin and movin, sailin and spinin, jiving and groovin, wailin and winnin. I don’t snooze, so I don’t lose. I keep the pedal to the metal and the rubber on the road. I party hearty and lunch time is crunch time. I’m hangin in, there ain’t no doubt and I’m hangin tough, over and out!”