"Packing heat" in US

It took some time to research and a few bucks, but I can now bring all my firearms to US and carry a concealed firearm in 26 states. When I tell them that, people usually ask two questions:

Because I want to enjoy some of that "right to keep and bear arms" that our southern neighbors have enshrined in their constitution. Not to roam the streets of Philadelphia with a .45 tucked in my waistband, but to avoid any legal concerns when doing some target practice in the forests of Pennsylvania Wilds. Experience tells me that potential encounters with law enforcement are much more pleasant when officers are presented with a few licenses and legal paperwork. Even when it's not what the local law requires, it clearly shows that I'm a law abiding citizen, licensed to own firearms in two countries.
I know what I can and cannot do in Canada because the Firearms Act (nonsensical and convoluted as it may be) applies coast to coast and my license is valid everywhere. In US however, every state has its own laws and licensing requirements. They differ in almost every detail, from who needs a license for what firearm and type of use, to how you are allowed to transport, to where and how you are allowed to shoot. Second Amendment notwithstanding, you can face criminal charges just for crossing a state line with a firearm that was perfectly legal where you came from.
How?
First, I cannot legally purchase firearms in US and am not planning to rent them, so I had to figure out how to bring in my own. After a bit of research, it turned out to be easier than I thought. Almost everything regarding firearms is easier than most people think, but you have to invest some time and effort to investigate the options because they are often not obvious or spelled out in one place. All you need is to submit the ATF Form 6NIA (Application/Permit for Temporary Importation of Firearms and Ammunition by Non-immigrant Aliens). Once the ATF sends you the approved form (I received mine within a few days via e-mail) you are ready to enter US with your firearms and ammunition. Canadian law allows transport of all your firearms to and from the point of entry, so no problem there (Canada will even let you import whatever you are legally allowed to own, but US won't let you export any firearms).

An important side note: Believe it or not, some firearms that are perfectly legal and non-restricted in Canada are regulated by the NFA and require special permits in the US that a Canadian citizen cannot acquire. Short barreled shotguns and firearms made by Chinese company Norinco are some of them. For example, make sure you don't show up at the border with any of these.
Second, familiarize myself with local laws. For now, I only intend to target practice in Pennsylvania and their laws are fairly liberal, even by US standards. However, to get there I have to pass through one of the most restrictive US states (New York) and I may have to get an OK from NY State Police at the border. Fortunately, the US Firearm Owners’ Protection Act shields those who are transporting firearms for lawful purposes from local restrictions which would otherwise prohibit passage. In short, i'll be fine if  I transport firearms through NY in the same manner that's legal in Canada, so no need to re-configure my luggage at the border in either direction.

Having a Pennsylvania Shooting Range Permit ($30/yr) will also help. I am examining options to get the PA Gun Permit, but that will likely require a visit to the sheriff's office in one of the non-resident friendly counties.

I recently applied for and received the New Hampshire Concealed Carry Permit. This permit is honored in 25 other states. 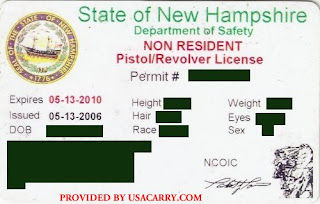 A clarification on concealed carry: I have no intention to wear firearms like a piece of clothing. Permit(s) just lessen my worry about variations in local laws. For example, even in places where open carry is legal (read: almost everywhere) having a firearm in your car is often considered concealed carry and can get you in serious trouble. Also, it doesn't hurt having a CCW permit when carry your gun in a holster while plinking in the countryside.

You'll notice a reoccurring theme of overkill when ensuring compliance with all applicable laws, regulations and safety procedures. I'll go out of my way and take many steps that are not strictly required to prove I'm serious about safety and follow the law beyond the proverbial "T". An extra permit or a padlock can only reduce the risk, for me and everyone in range :).
Posted by Vlad