One of the headlights on our scooter burned out today. No big deal, you think, how hard can it be to replace an H4 light bulb? Not as easy as it seems. The headlight housing is not very accessible on the scooter since it's surrounded by a lot of tupperware, so I decided to consult the Yamaha Service Manual just to make sure I don't break something or do any more work than necessary. Well, it says "remove the front cowling" first! Now that's a huge PITA - I'd rather do the adjustment of all 16 valves on my Bandit than mess with those ill-fitting plastics that somehow always end up assembled in the wrong order, with extra screws and possible broken tabs. I knew chances to avoid all that work are slim (after all, it's the factory manual) but I had to take my chance. Long story short, with manual skills that would make a gynecologist proud (I'm not one, but I can take a look :)) I managed to wiggle the plug, rubber cover, wire clip and the bulb out. It was tight as a (insert your favorite association here), but it got out and the new bulb went back in without much trouble. 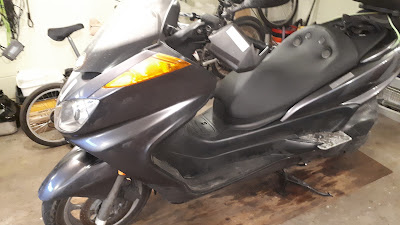 Yamaha says you have to remove all the plastics surrounding that headlight, from both sides. That's at least four panels held by a dozen screws and as many tight-fitting tabs. 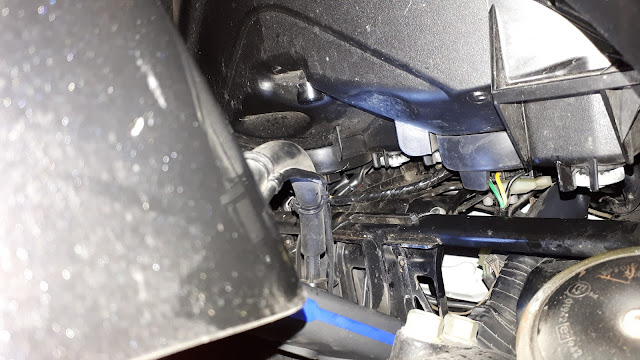 The alternative is to try to reach the headlight from the inside and below, navigating through the tight space above the front wheel and very deep into the fairing. The green, yellow and black wire seen up there lead to the bulb connector. Above it is the bulb, surrounded by the black rubber dust cover and secured in place with a wire spring. All of that has to come out and back in through the space barely wide enough to stick a couple of fingers in...

The moral of the story is that service manuals and other official maintenance documents should not be taken as gospel (not that I take The Gospel as gospel either :)). Although they contain valuable and necessary information, they are sometimes influenced by lawyers instead of mechanics. As another example, both Suzuki and Haynes manuals for the Bandit say that you have to remove the tank in order to remove the valve cover. Did it several times with the tank on and it wasn't in the way at all. I guess they are afraid of someone suing them when they scrape a finger on a part that could have been removed prior to servicing.