Had breakfast with Jasna and Sava, said goodbye to their boys Pavle and Stefan and left Bedford. I have until Moncton to decide whether to take the faster or the more interesting route. Guess which one I've chosen? :)

I was riding like the wind for several hours, mostly at 130-135, to get to Saint John, NB where the interesting roads start. Somewhere along the way the Majesty suddenly lost about 20% of power with no other symptoms of anything being wrong. It was brief, so my fear of busted throttle body diaphragm was quickly dispersed. It kept going at the same pace for another 50Km or so while I was keeping an eye on the instruments looking for any signs of trouble. No red lights, no blinking, no engine temperature change and most of all no change in sound or behavior of the engine.

Then it happened again. This time it lost power for about 10 seconds and then just shot down. The engine turned off as if I turned the ignition key, but no other drama - just coasted over to the shoulder. 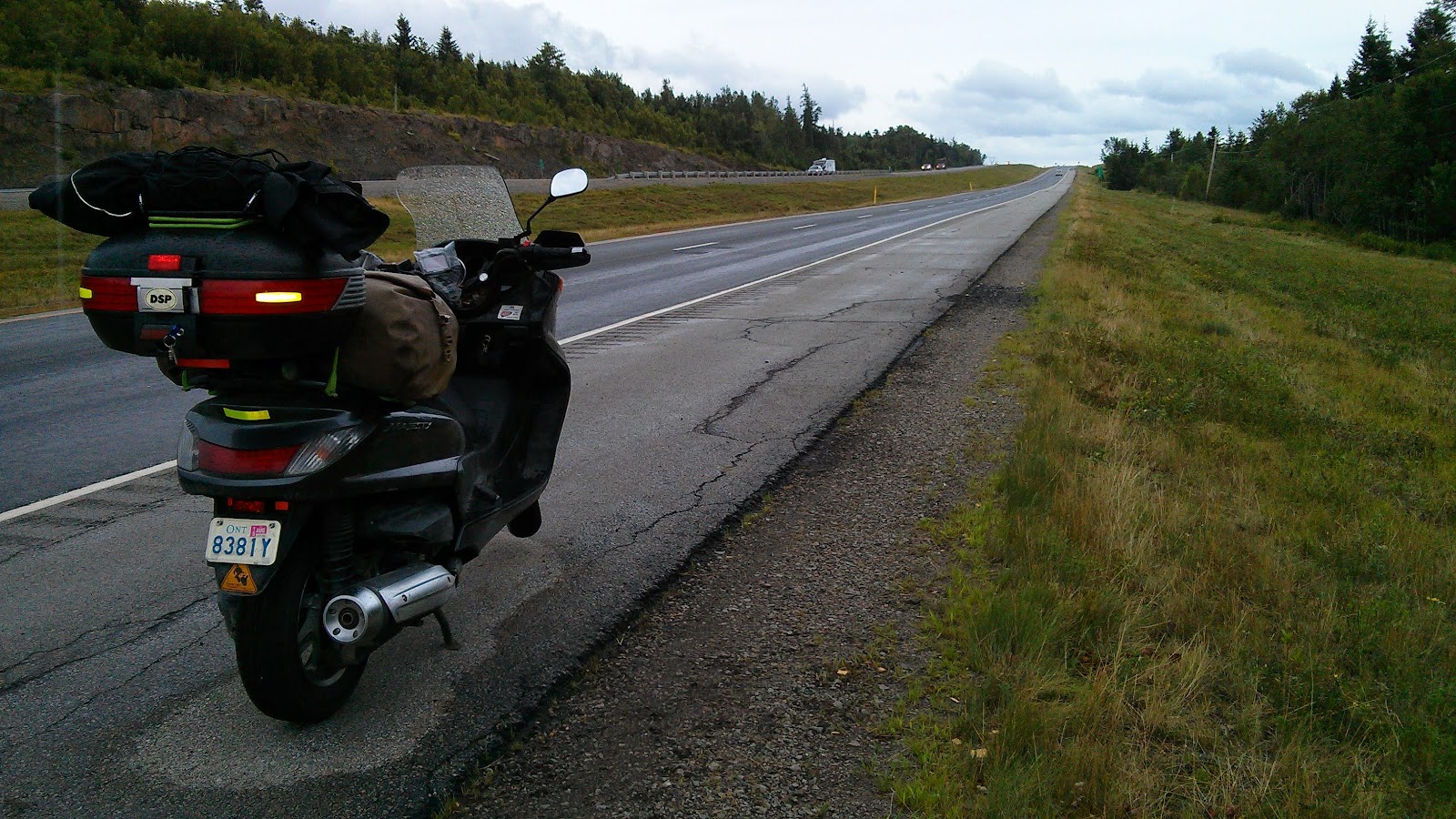 Gave her a few minutes to cool down and then tried to start her. A few labored turns of the crankshaft and then the dashboard reset as if I disconnected the battery. One more try resulted in some grinding noise and from then on it wouldn't even turn - just click the starter. Time to call CAA. Fortunately I had the cell signal and the flatbed truck came in less than half an hour.

It turns out Daniel the truck driver is also an avid off-road rider and it took just a few words for me to realize I can trust his judgment and expertise. We discuss the failure as we load the bike and conclude to take it to his shop in Apohaqui rather than Yamaha dealership in hope it's something we can fix together. I'm seriously hoping it's the busted V belt because the symptoms were similar to a belt wrapped around the front sheave. That's something we can fix in half an hour because I carry a spare belt.

To get easier access to the CVT you need to take the left air filter off first. The cover came off and I immediately noticed that the red UNI foam filter is completely gray from dust and sucked in a little at one corner. As soon as I removed the filter, about 1/4L of oil came out, smelling very burned. I knew then that majesty is dead :(. Oil level check showed no oil in the engine. It seized. 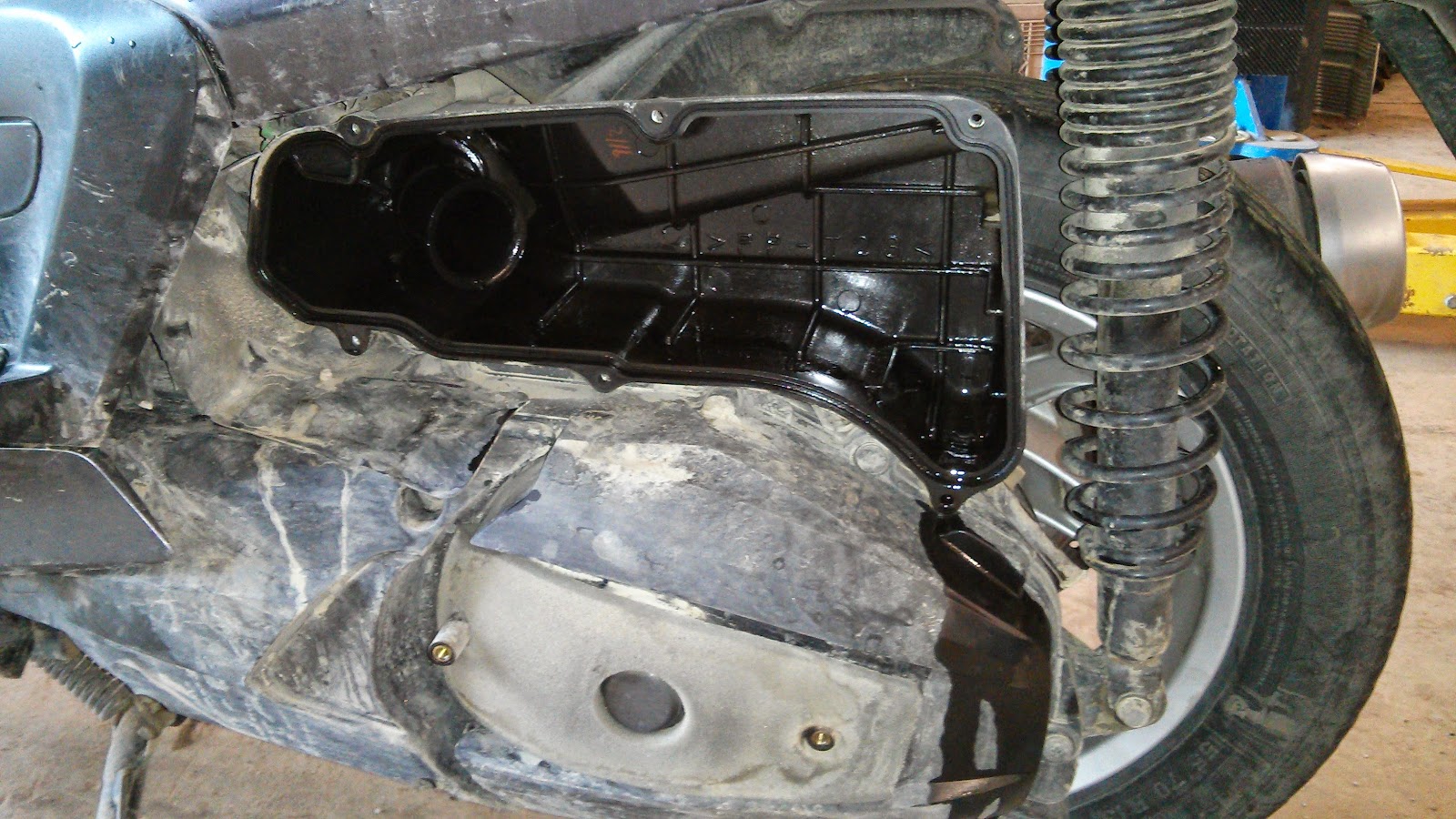 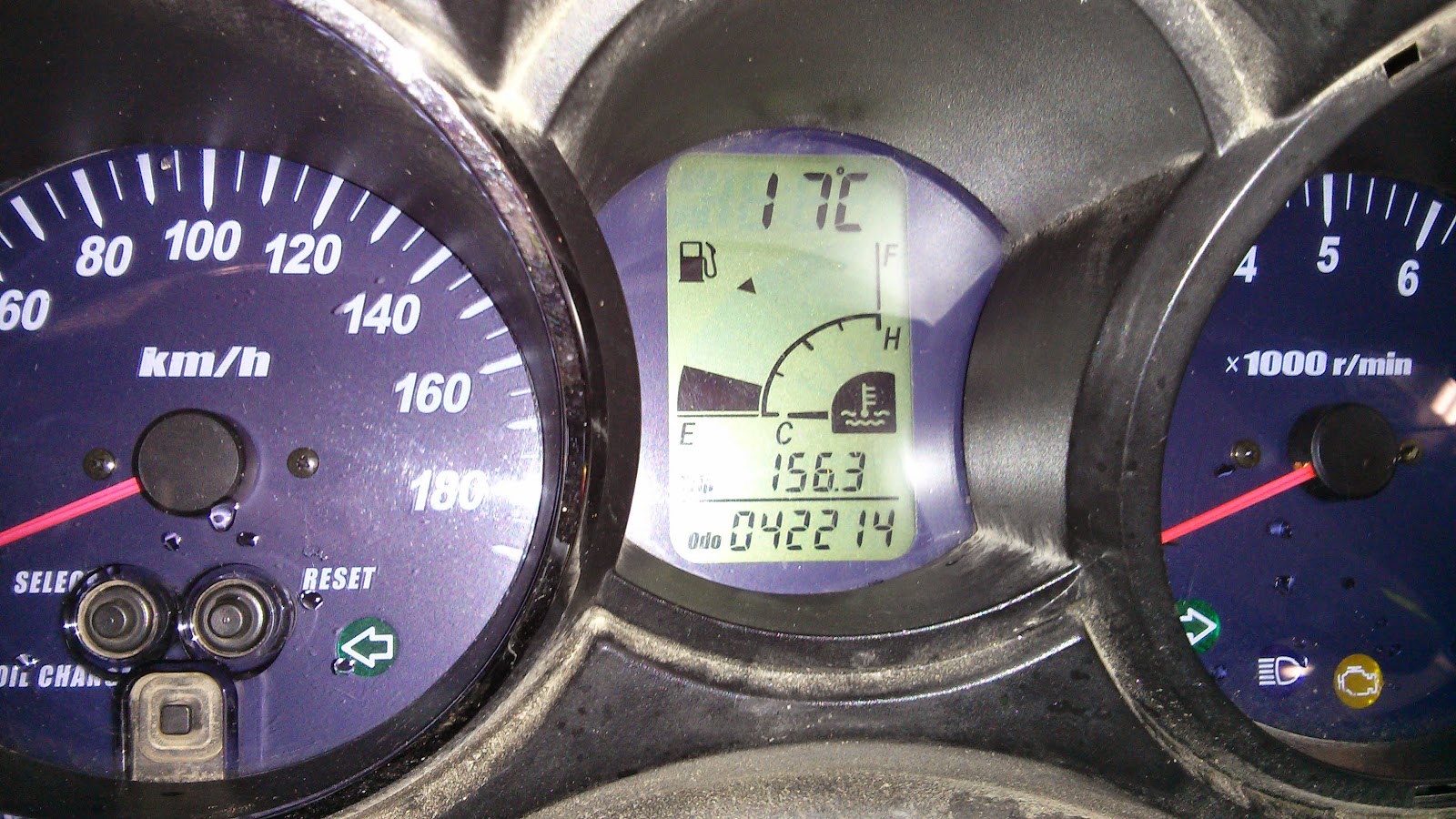 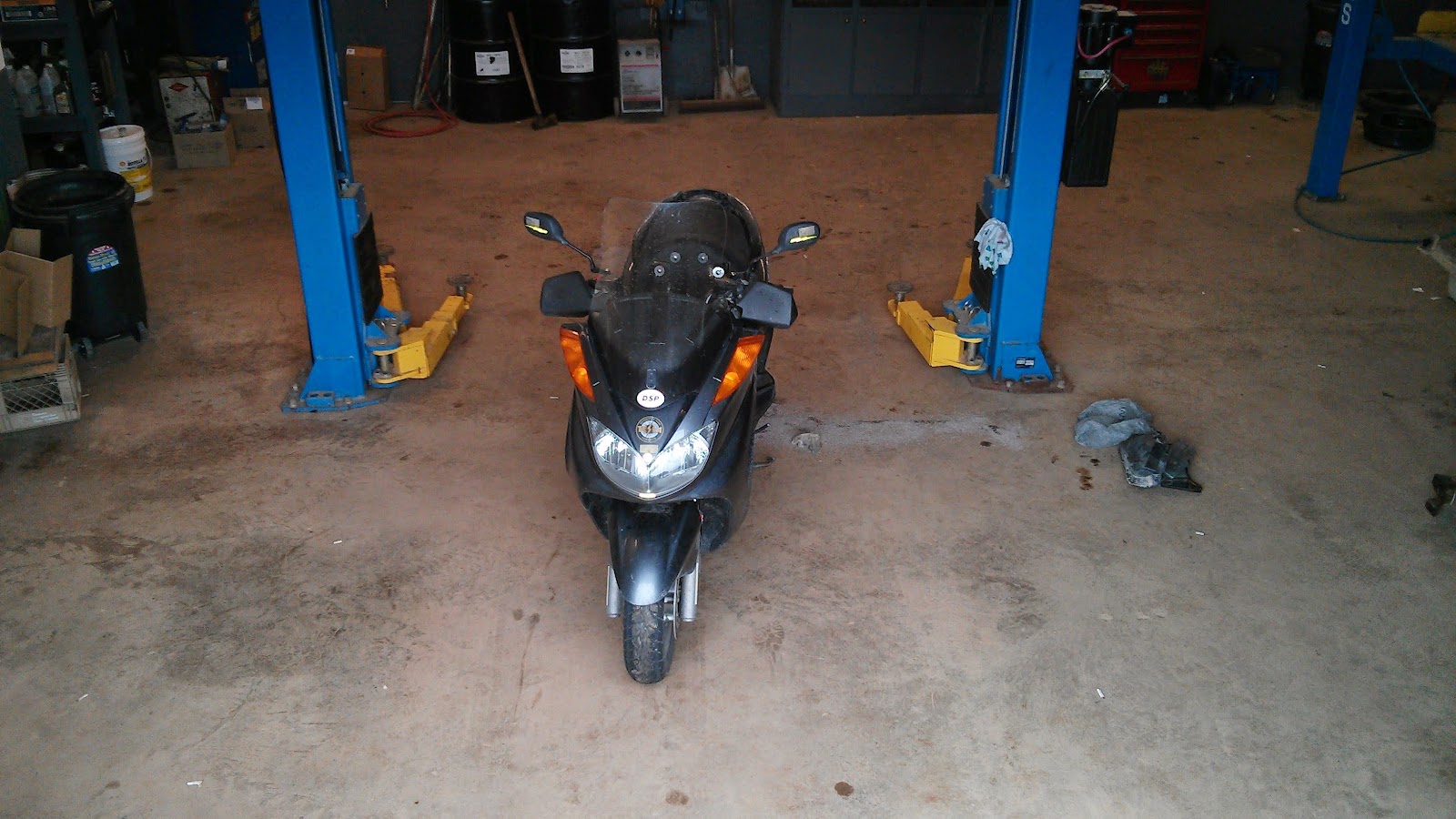 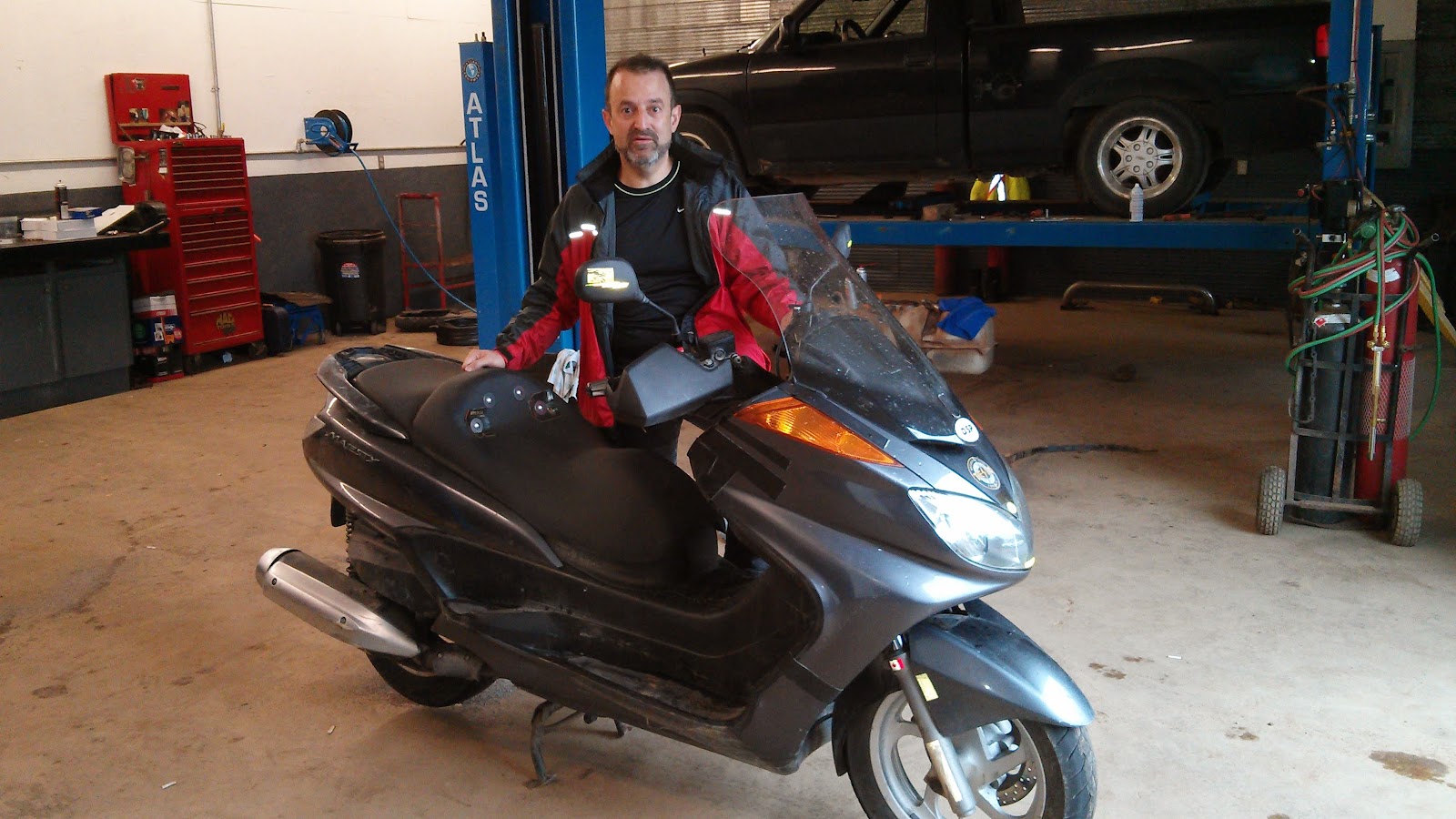 Our last picture together :(. I never had to abandon a vehicle and this was a very emotional moment for me.

It was obvious that fixing it is not an option. It would be hard enough to justify the cost if it happened at home, let alone 1,500Km away. With Daniel's help and consulting with Duda over the phone I quickly examined all options, including taking it back to Krstics place or renting a van to take it to Toronto. All time consuming and cost prohibitive. With a heavy hart I decided to leave it with Daniel to make whatever he can out of it, sell it or scrap it.

I took off the GPS, the license plate, tools and luggage off the bike. Explained some added features to Daniel in case he decides to sell them separately. Left the full 10L jerry can with a request for it to be given free of charge to the first motorist in need, especially if it's a motorcyclist. On it I wrote the inscription to pay it forward along with dates it went on James Bay Road and Trans Labrador Highway with me.

The bike is going nowhere, but how am I going to get home? Again Daniel to the rescue with his advice, knowledge of local transportation and a phone. Since renting a car one way to Toronto was ridiculously expensive Daniel's pal Greg was kind enough to take me to the bus stop in Sussex (actually a gas station where the buses stop). It cost me $220, took four different buses (all well appointed and comfy) and 20 hours to get home.


Her Majesty is dead. Long live the King! 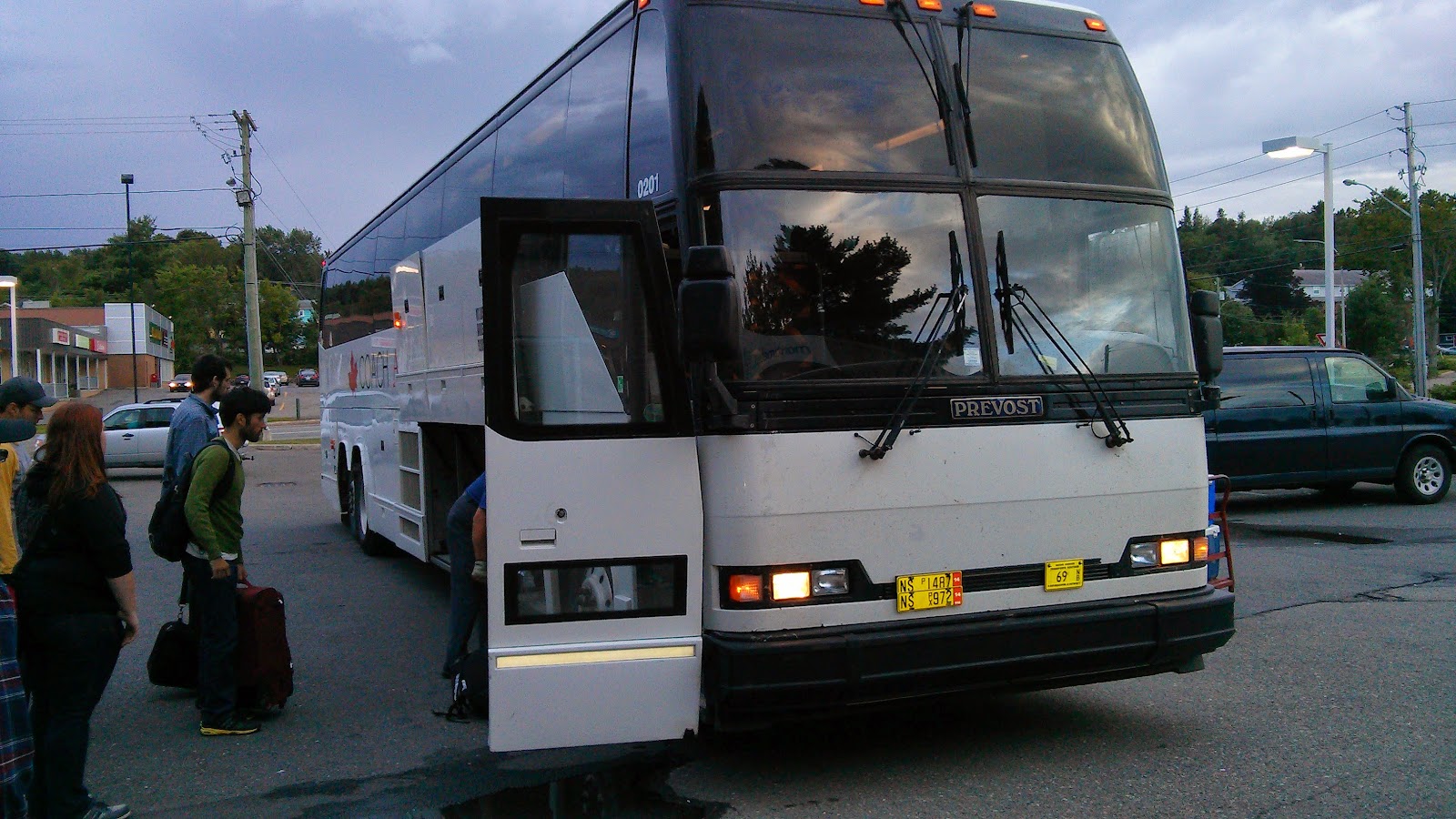