Eldor's excellent report is up, check it out here:

His description of our encounter is very amusing, not to mention quite flattering:


So I'm riding along enjoying for a change the relatively slow and very relaxed pace (the fuel computer was reporting that the bike was using about 3 litres per 100 km, the best I'd ever gotten!) when I noticed headlights coming up fast from behind me. As the vehicle got closer the headlights became a single headlight. Another biker! We waved at each other and gave thumbs up as he passed and then I thought, "What the heck was that?" Something very unexpected had registered in my subconscious mind and with him riding off ahead of me, I wasn't sure what it was. But something had bugged me.

I brought my speed up to 120... He was still pulling away. Usually I love to give chase (and very few actually pass me) but the new improved and oh so relaxed me decided to just let him go. I was on track for getting the most economical tank of gas I'd ever gotten and I couldn't wait to check when I next filled up. The heck with it - let him go.

A while later, maybe half an hour, (I'd even lost track of time) I could see a biker pulled over ahead of me. As everyone does on the Trans Lab, I pulled up next to him to make sure he was alright. It was the guy who'd passed me earlier, and I saw what it was that had bothered me. He was riding a SCOOTER! A Yamaha Majesty 400 cc scooter, and with a car tire on the back wheel!

All of my macho sense of accomplishment went out the window. Passed by a darn SCOOTER. What's next? A Honda Odyssey mini-van full of little children smiling and waving as they pass me? SHEECH! A damn SCOOTER! Meet Vlad from Toronto, who will henceforth be known (with the utmost respect) as "The Crazy Serbian". 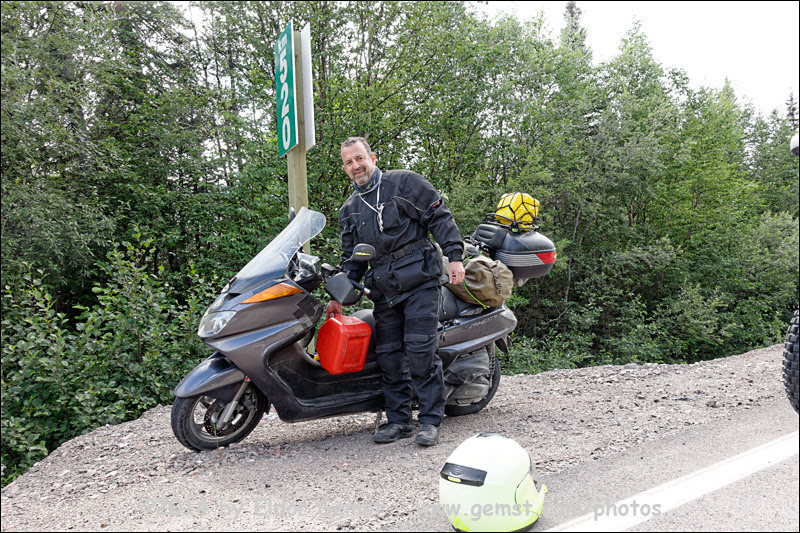 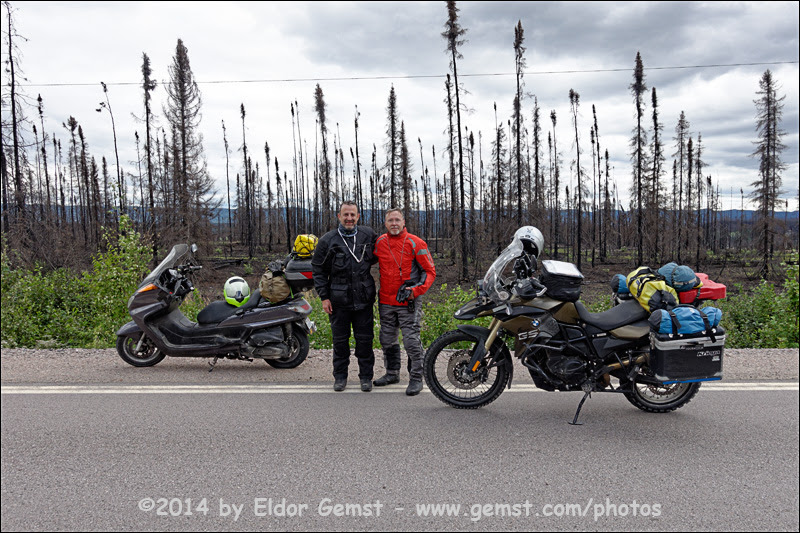 Vlad had ridden his scooter all the way from Toronto and he was doing the Trans-Lab. And here I thought I was doing such a courageous adventure (remember the Olympian from my first post) only to be passed by someone riding a scooter. I don't think I'm going to tell anyone about that. Vlad had run out of gas and was filling his tank from what looked like a 5 gallon can he kept under his seat.

Anyway, we clicked, in that way only fellow adventurer riders can. We were both headed to Happy Valley Goose Bay for the night and he had reservations at a B&B. I had nothing. I was open to camping, a B&B or even a hotel. Vlad suggested we ride together (only about 120 km remained) and if the B&B had an extra room, I'd stay there and we'd have dinner and drinks together. Vlad had a fine old Scotch with him and I had 12 year old rum. Kindred souls.

Vlad said I should go ahead, but since he knew where he was going and had a GPS, I told him to go first. He then asked me what speed I wanted to ride at. Geez, I was riding a REAL motorcycle, and I was an adventure rider, and my bike was 800cc and his SCOOTER was only 400cc. I puffed up my chest and said something like "Whatever speed you want to ride at is fine with me."

So Vlad took the lead and promptly took it up to about 140 kph!

My competitive nature kicked in and I took off in pursuit. But not for long. For the first time in a few days, I had wind noise in my ears, with the knobbies my bike was shaking more than I liked, and watching the fuel computer showed that instead of the 3 L/100km I'd been doing, it was now up to 7.5. I followed for a little while... 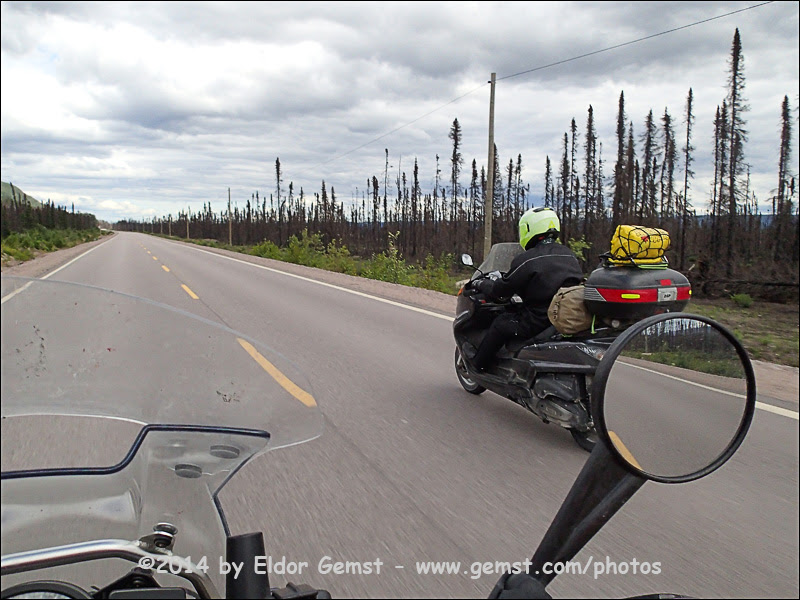 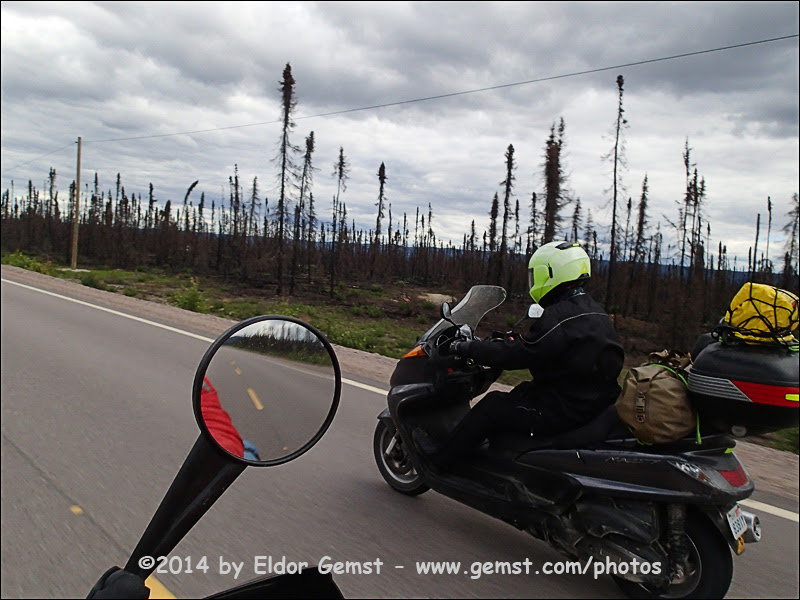 ...and then I asked myself what the heck I was doing. I went from a peaceful more relaxed ride than I remember having done to wind noise in my ears, bad fuel economy, more wear on my tires, and more stress for what? For my macho pride about letting a SCOOTER (I can't get over that) get away from me? For a guy I just met and spoke with for only a few minutes? What's wrong with me? So I came to my senses and slowed down to close to the speed I was doing earlier. Let the Crazy Serbian go! But Vlad was kind enough to slow down and wait every once in awhile and we finally entered Happy Valley Goose Bay together. First stop was for Vlad to get gas. I continued on to a place the gas station attendant suggested might have those Trans Lab stickers I so desperately wanted.

Only problem was that it was Sunday early evening, and all the stores were closed for the day. I met up with Vlad and together we went to the Tim Horton's to use their WiFi and washrooms. Then we rode to the B&B he had reserved, only to find they had no other rooms available. Vlad's room had a double and a single bed, and he was extremely kind to offer the single bed to me. But I'm kinda set in my ways, and I really like my privacy but what I didn't like was that there was only one washroom/shower for the entire B&B. I told Vlad that I'd check out my other options and that if nothing else panned out, if his offer still stood, I'd be back.

On my list of notes for the trip, I had several hotels. None of them great, and all of them expensive. While looking for the one with the best reviews, which I didn't find, I saw another one (which I knew didn't have the best reviews) but it had ON PREMISES one of the Jungle Jim restaurants. (I'd really enjoyed the one in Labrador City.) It was the Hotel North Two, on Hamilton River Road. The woman at the reception desk was somewhat gruff on first impression, but really turned out to be fantastic. And it was because of her that I decided to stay there that night.

So I unloaded all my gear, put it in my room, and then sent a text message (thanks to the WiFi they had) to Vlad to let him know where I was and telling him to come join me for dinner and drinks. I put my bike on the center stand and tightened the chain (it had gotten really loose) and lubricated it. When I finished Vlad still hadn't shown up, so I cleaned up and then went to the reception desk to ask for advice about where I might find the most special "I survived the Trans Labrador Highway" stickers. Joann, the woman at reception, turned out to be an absolute sweetheart. She let me use the phone at the reception desk and kept suggesting different places to call (and giving me the numbers). One after another either didn't answer (it was evening on a Sunday night) or they didn't have the stickers. And the next day, Monday, believe it or not, was going to be a civic holiday with everything closed because they were going to have of all things, a canoe regatta. That's apparently a big deal in Labrador. So I wasn't going to find any stickers in the morning either.

Joann saw how badly I wanted one of those stickers and she finally said that she would find one for me when the stores opened on Tuesday and mail it to me. Really? I couldn't believe my luck! I offered to pay her but she refused, saying she would be glad to do it. What a sweetheart! Before heading to the bar to await Vlad, I did manage to force a few bucks on her as I felt it really wasn't fair for her to pay for this herself.

(Joann did actually send me some stickers, but they were credit-card size and didn't look like they were meant for outside use, and I've since learned that she has lost her job at the hotel for political reasons, which is a real shame. The hotel was the pits, and Joann was the only redeeming quality. I really wish her the best of luck and if I had a business there, I'd be happy to have her working for me.)

I went to the bar, and started on a much desired and anticipated and deserved local draft beer. Vlad arrived, and also had a beer, before we got a table for dinner. That's Vlad's helmet on the bar: 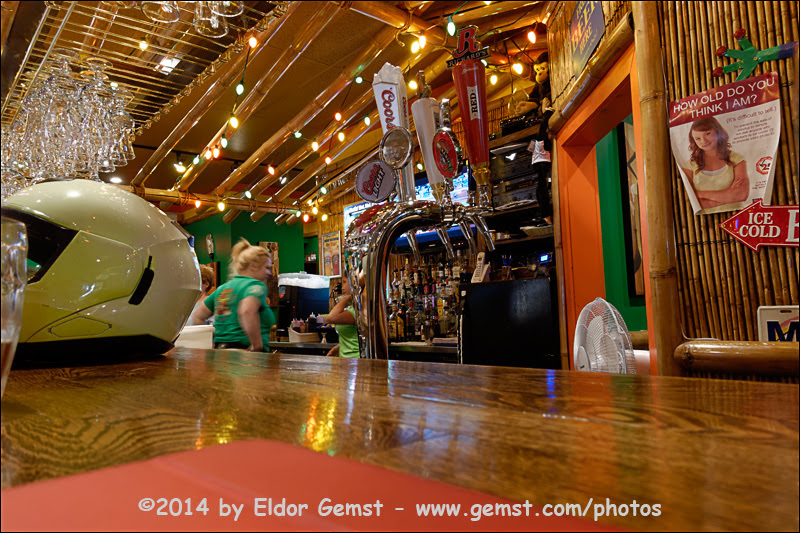 I thought I'd taken some photos of us at the table eating dinner, but I can't seem to find them. Must be my old age.

After a good dinner and too many beers (gee, I was making a habit of that) we said our good night's and Vlad headed back to his B&B and I to my room.