There is 530Km of unpaved road between Goose Bay and Red Bay, some of it under heavy construction and in unknown state. It can be a breeze or total horror and there's no way of telling which. Most people I meet tell me it's OK, although bumpy in some sections, but those are all car/truck drivers. A few motorcyclists I met differ in their opinion like day and night, which tells me I should ignore whatever they say. It's hard to ignore a horror story from someone who just came from where you want to go though.

Dispatched 400km of gravel to port hope Simpson in 5 hours. The road is wide and there are no sharp turns. Although special care needs to be taken to aim at the right track in some sections it's mostly well packed. Parts where graders are at work are well marked (a cone in the middle of the road, signs on the sides), so I just slow down there, but rarely below the official speed limit of 70. Graders leave a high gravel "curb" in the middle of the road and some pretty big stones close to the shoulder. In order to stay on solid surface I ride in the narrow corridor between randomly dispersed big rocks and the soft and banked shoulder. In summary, a lot of little things to make it interesting, but no serious threat if you know what you are doing. 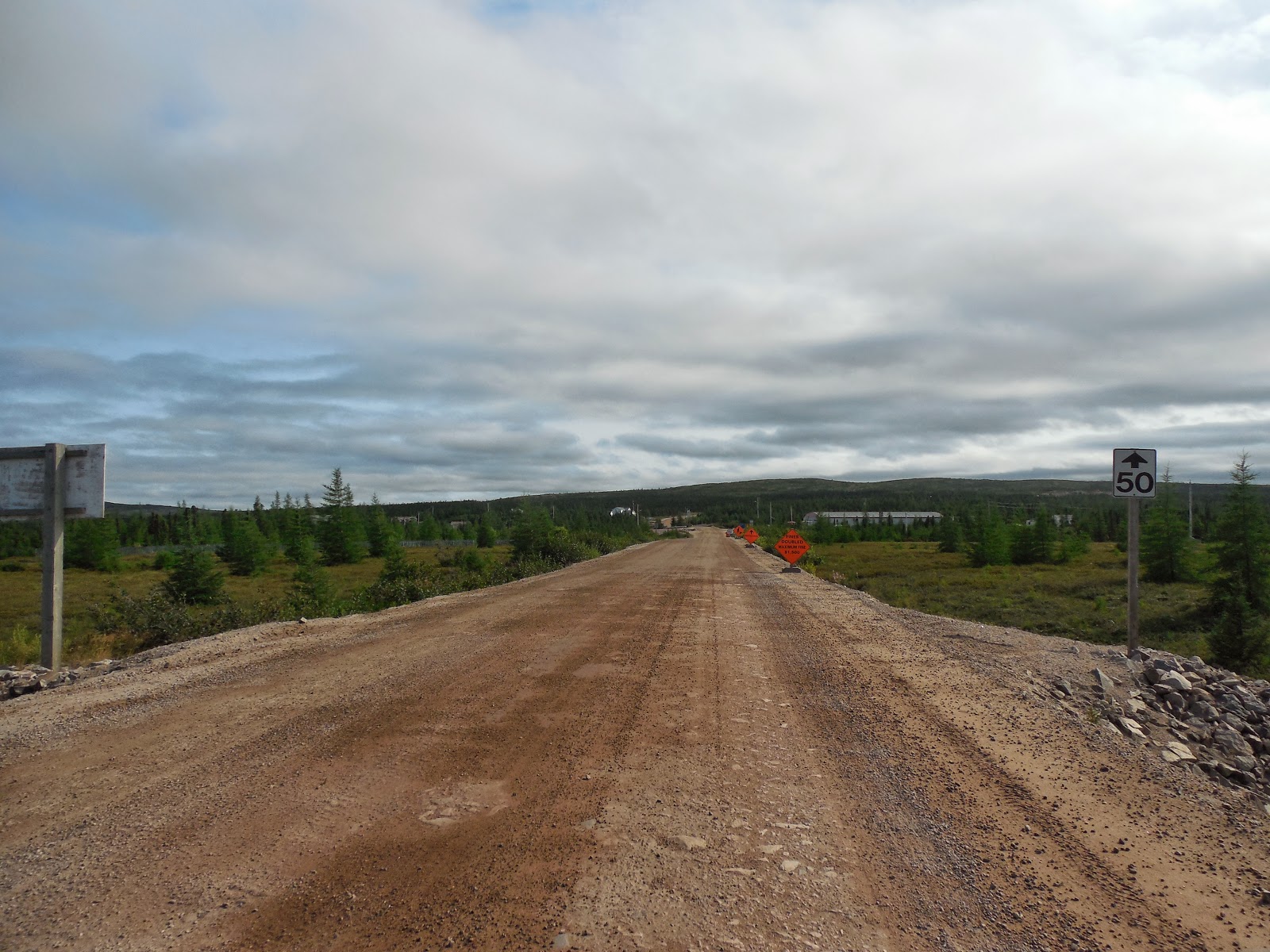 It's easy to get carried away with speed on a road like this. There are no signs, telephone poles, road markings or other points of reference, so by the time you realize you are going too fast it can be too late to slow down. As for slowing down, braking is usually not an option until you get your speed down to at least 50, and even then you have to be very careful. I didn't touch the brakes much while I was on gravel and I especially stayed away from the front brake lever. As my rescue Daniel said, off-road things can get very nasty, very quickly, at a very low speed. As far as I had the nerve to take my eyes off the road and check the speed I was usually going between 90 and 110. At one point I saw 130 and slowed right down. No need to kill myself that quickly.

Having lunch by the ocean in Port Hope Simpson Alexis hotel. Next 200km should be the toughest road I ever rode, bar none. The horror stories I've heard and pictures I've seen are enough to make one cringe. 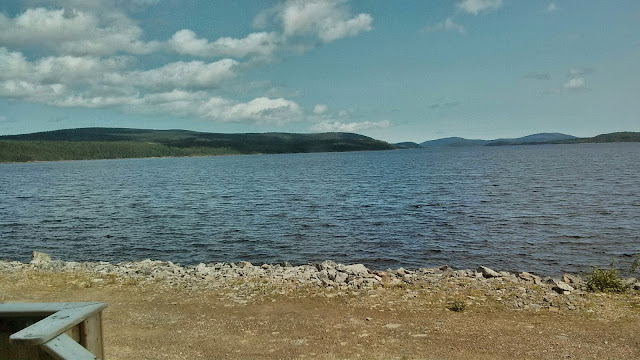 Well, all those stories about washboard, potholes, mud, loose gravel, graders and trucks amounted to nothing. Not a single problem, or at least not to the extent that would be scary. The only indication that this is not a very smooth road are my rear view mirrors that miss-align all on their own. It's not like what's behind me matters or I can even see it from all the dust her majesty is picking up :).

After Cartwright junction it got a little rough and bumpy, but again nothing to worry about. Only after Mary's Bay it became a rough-around-the-edges road under intensive construction. Still, slow down when you see the road crew and pay attention to the road surface and signs on it. Totally dumbfounded by the gross discrepancy between my experience and those of others (pictures of some i have seen with my own eyes), I asked one road crew what the fuss is all about. Oh, they tell me, it is like that in the spring, after the ice thaws. Mystery solved, at least partially. 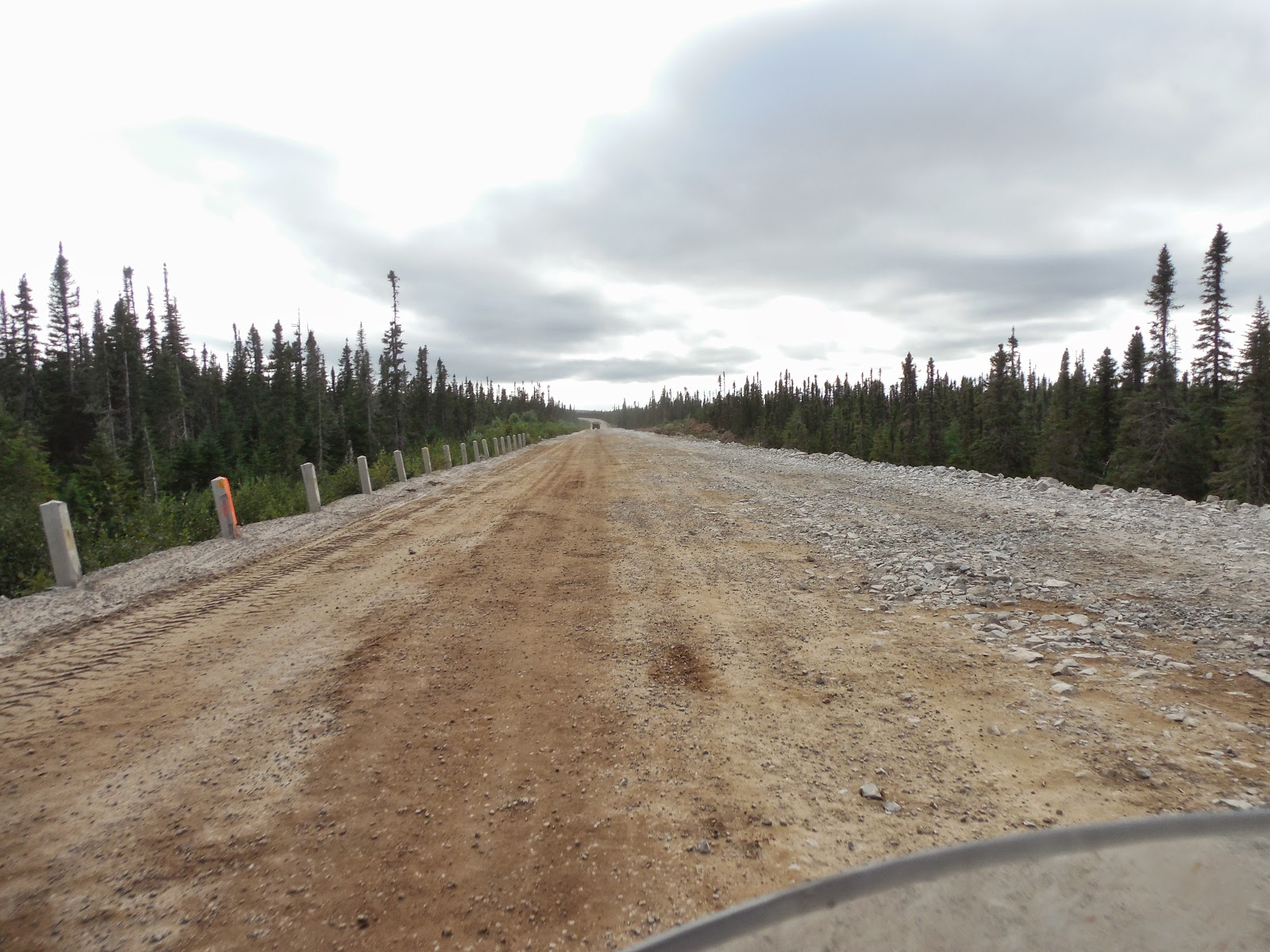 Still, all that constant focus on the road drained me pretty well. Treacherous it wasn't, but 500+km of gravel is nothing to sneeze at either.

It helped greatly that the weather was great all day, between 12 and 22 and mostly sunny.

They call this section of Trans Labrador Highway the Labrador Coastal Drive, but a "Taiga to Tundra Drive" would be more appropriate. Scenery varies within its constraints but is mostly flat and without  many interesting feature or vistas. You don't see the coast for the first 400Km, and even after that only sporadically. 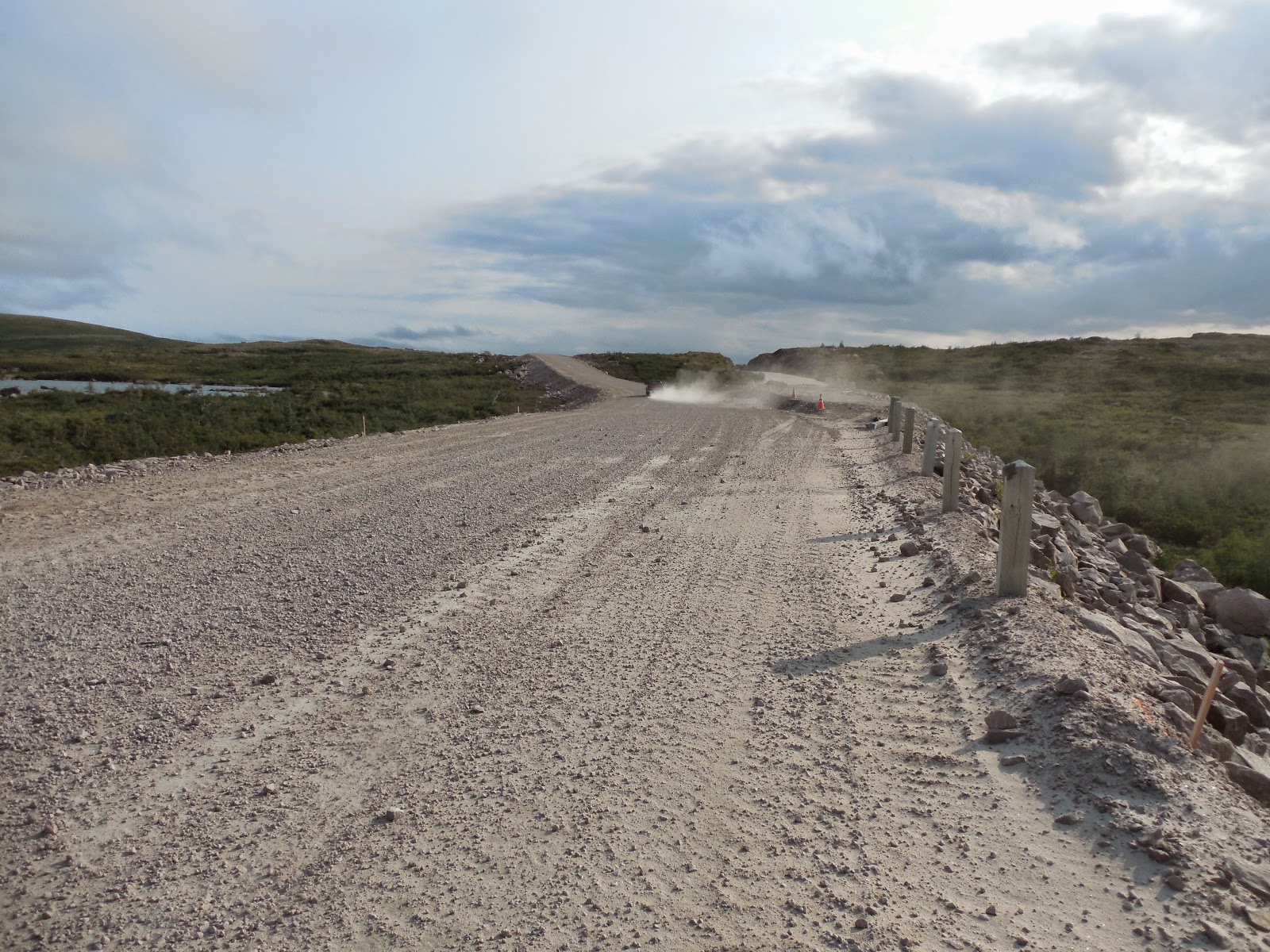 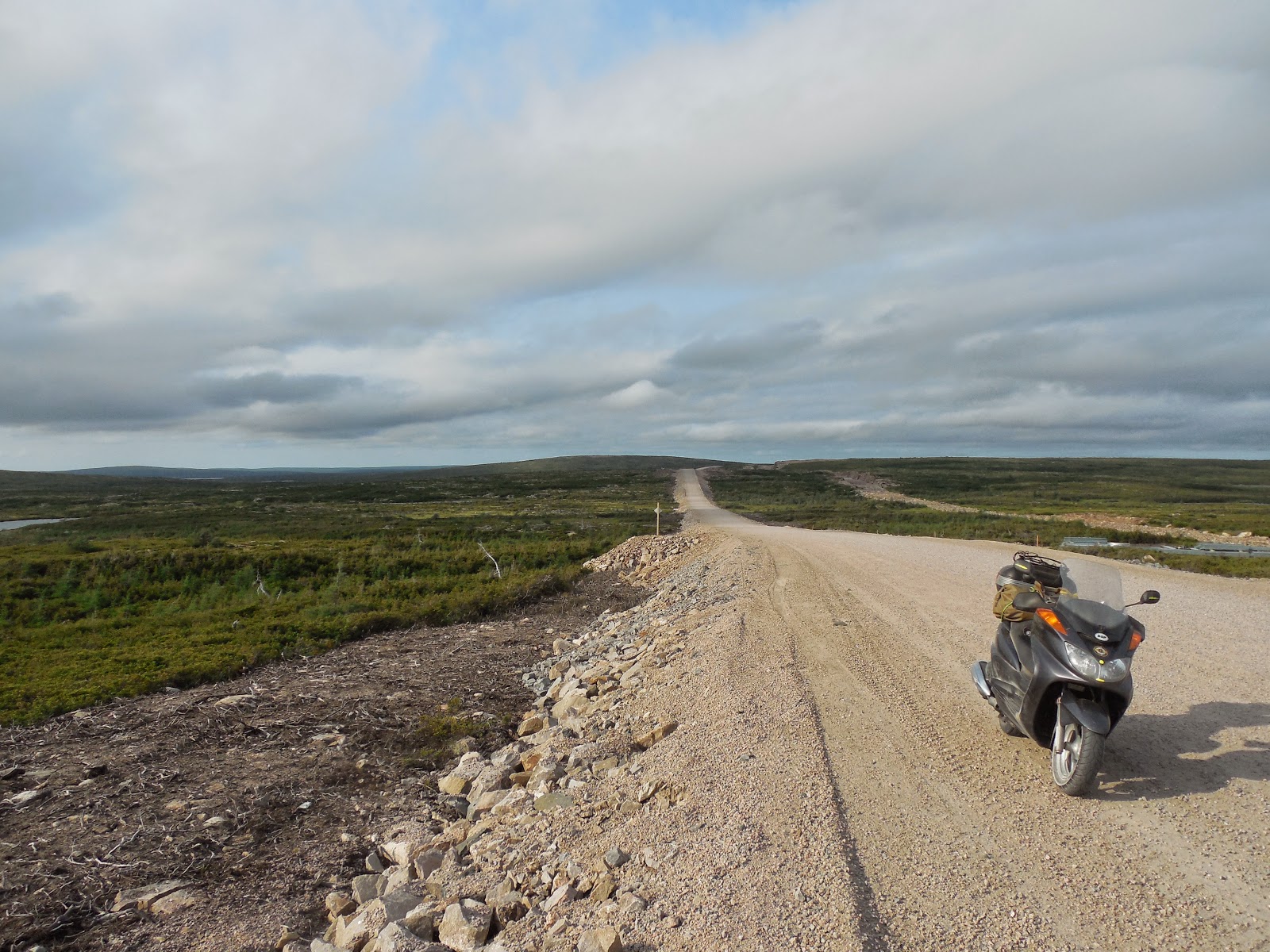 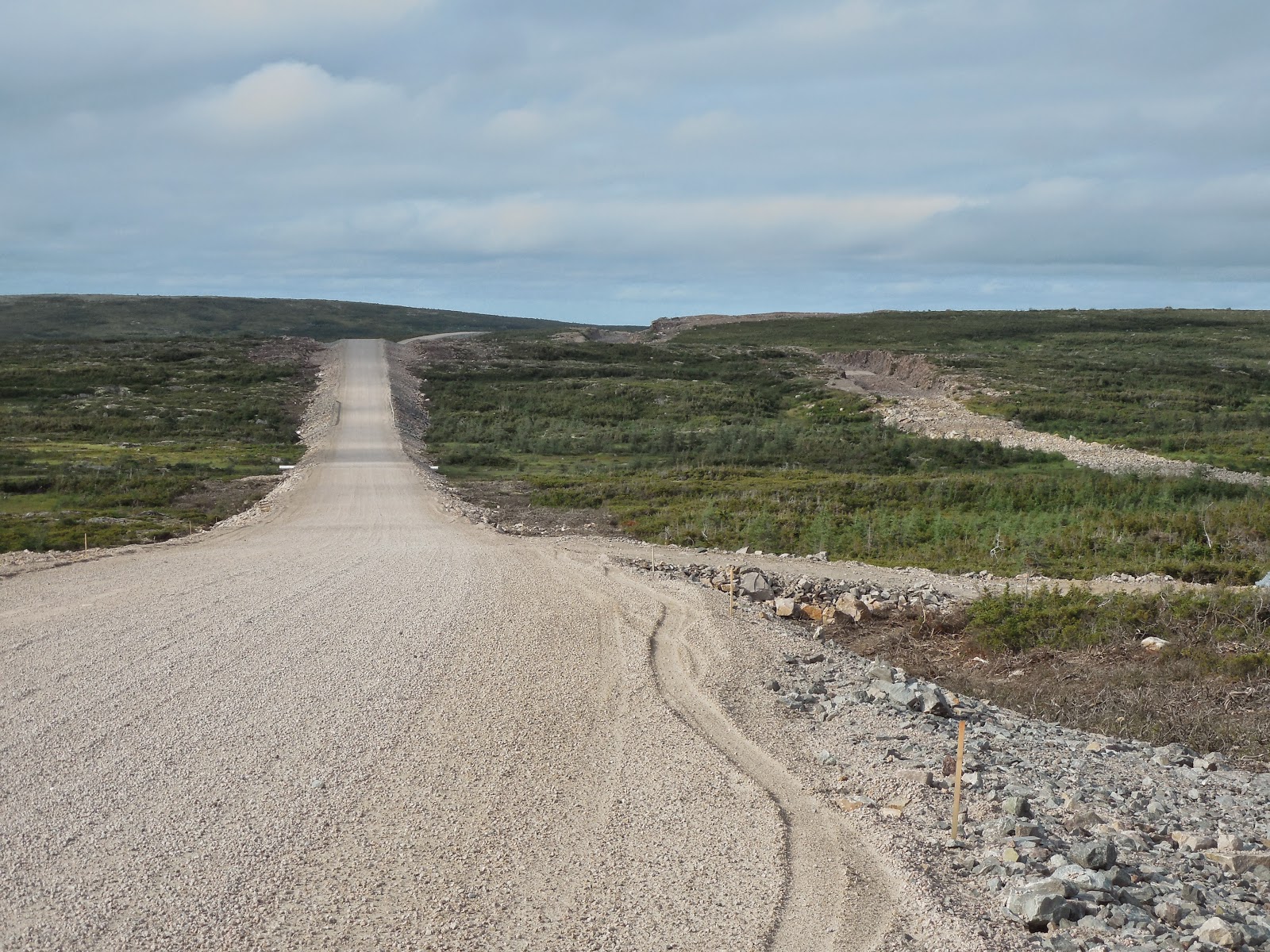 The soft, freshly graded section. You can see two roads in the distance - the current one on the left and the new one cut through the hill on the right. They seem to be taking their construction seriously and it looks like this road will require no further rerouting once they decide to pave it. 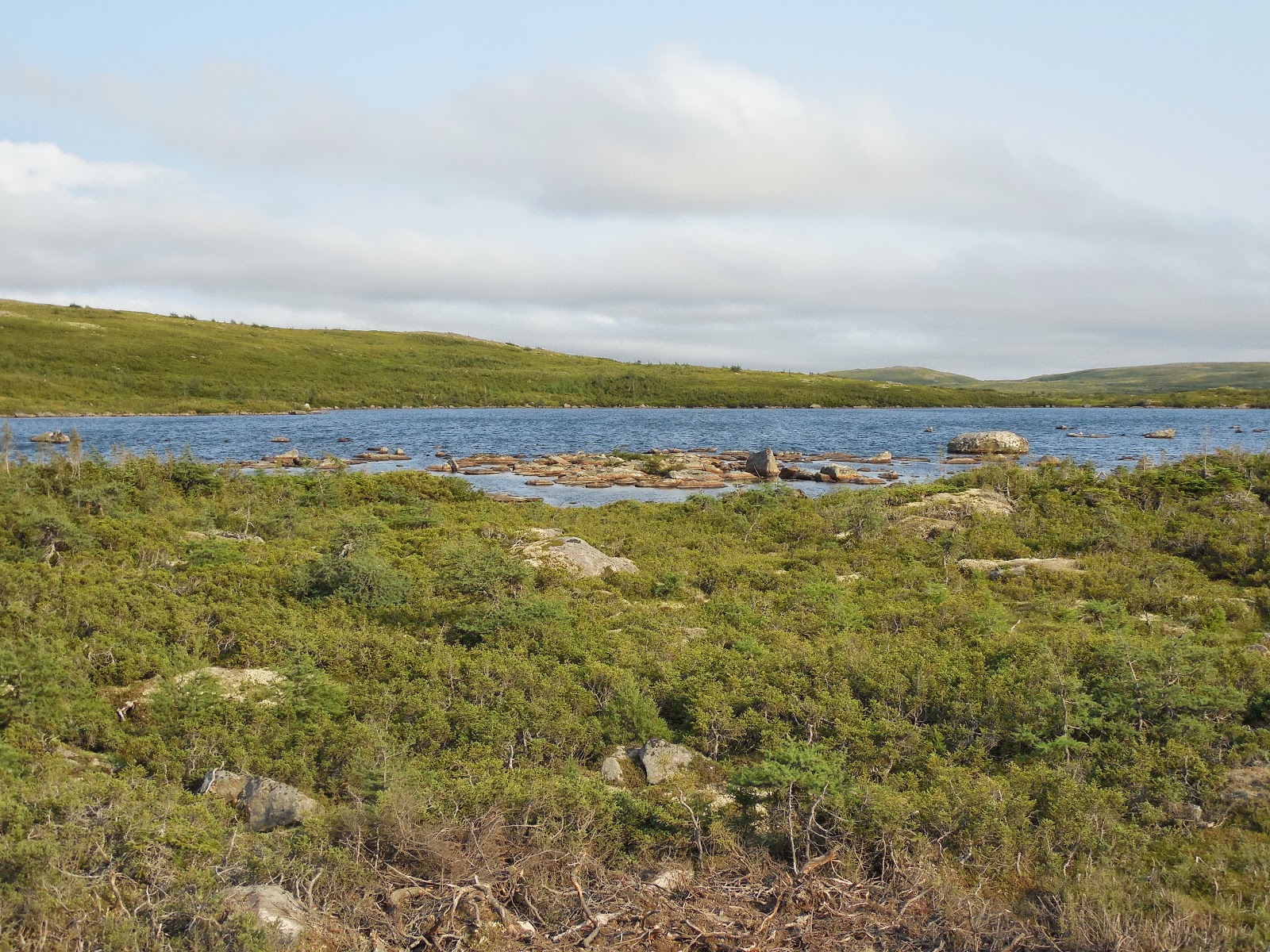 It's mostly tundra here. Moss, grass and some shrubs - no trees. It's interesting to me because this kind of scenery is usually encountered much further North.

It becomes the real "coastal drive" only after you reach the pavement again at red Bay. From there on it's very scenic and entertaining. The road surface is pretty decent, but much narrower than gravel road. 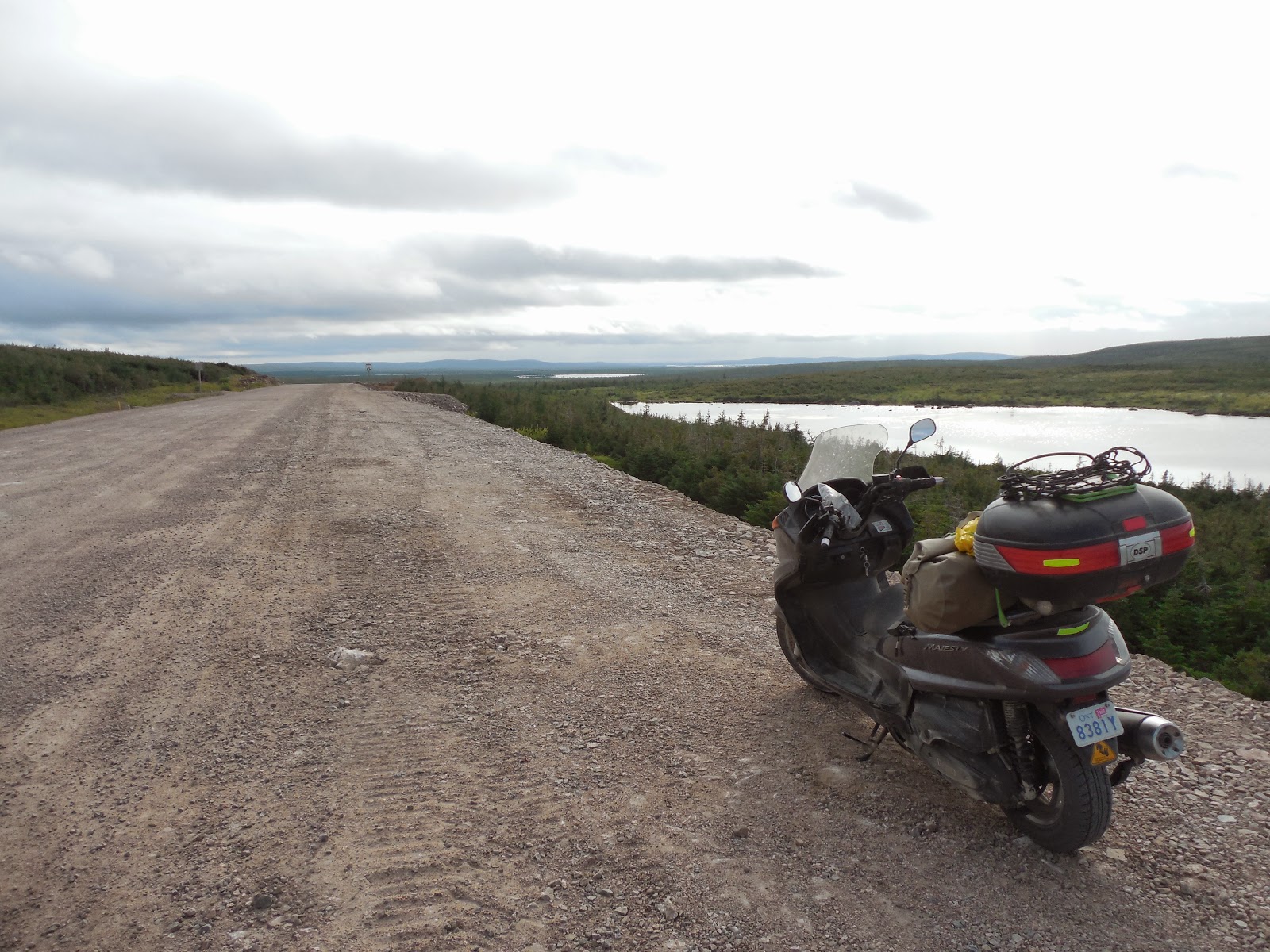 Found my hotel in Blanc Sablon after a bit of searching. Who would have thought that the hotel by the road in a very small town will be hard to find? Fortunately a fellow local rider went out of his way to lead me right to it. Early ferry tomorrow to Newfoundland.
Posted by Vlad