Gorgeous morning in Sainte-Luce, 16 and sunny. WiFi works on the ferry, so it looks like I'll be blogging and watching Netflix. It's a short one hour ride, but will try to take a nap as well. I'm going to need it because I woke up several times last night in fear my alarm won't go off and I'll miss the ferry :). I did otherwise have a good night sleep. 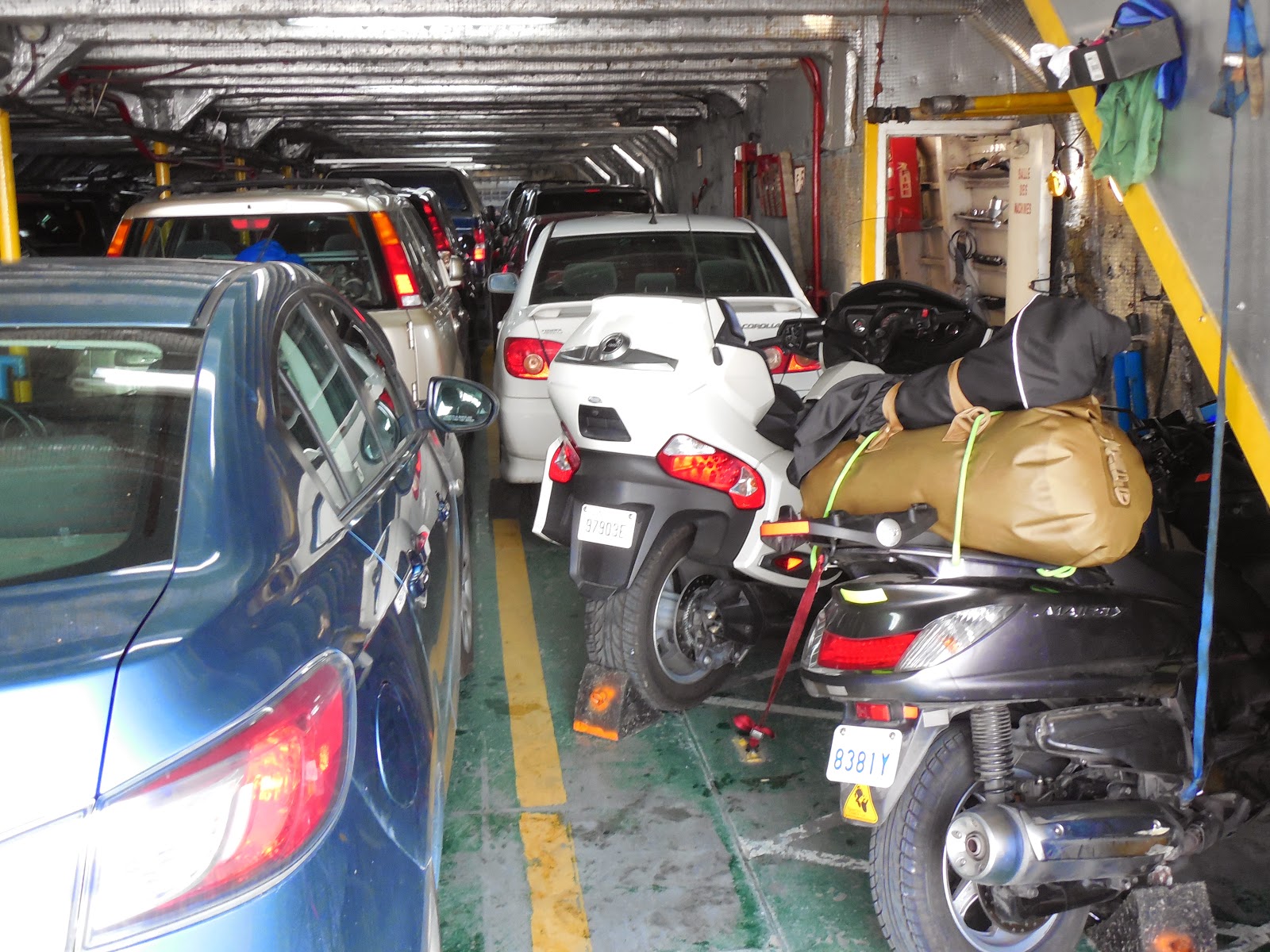 Well, I spoke to early about WiFi. I connected to it, but IT is not connected :). Nap it is then.

This ship sails at 44km/h. That's very fast for any boat, let alone a ferry. You can tell by the way it jets all that water behind. 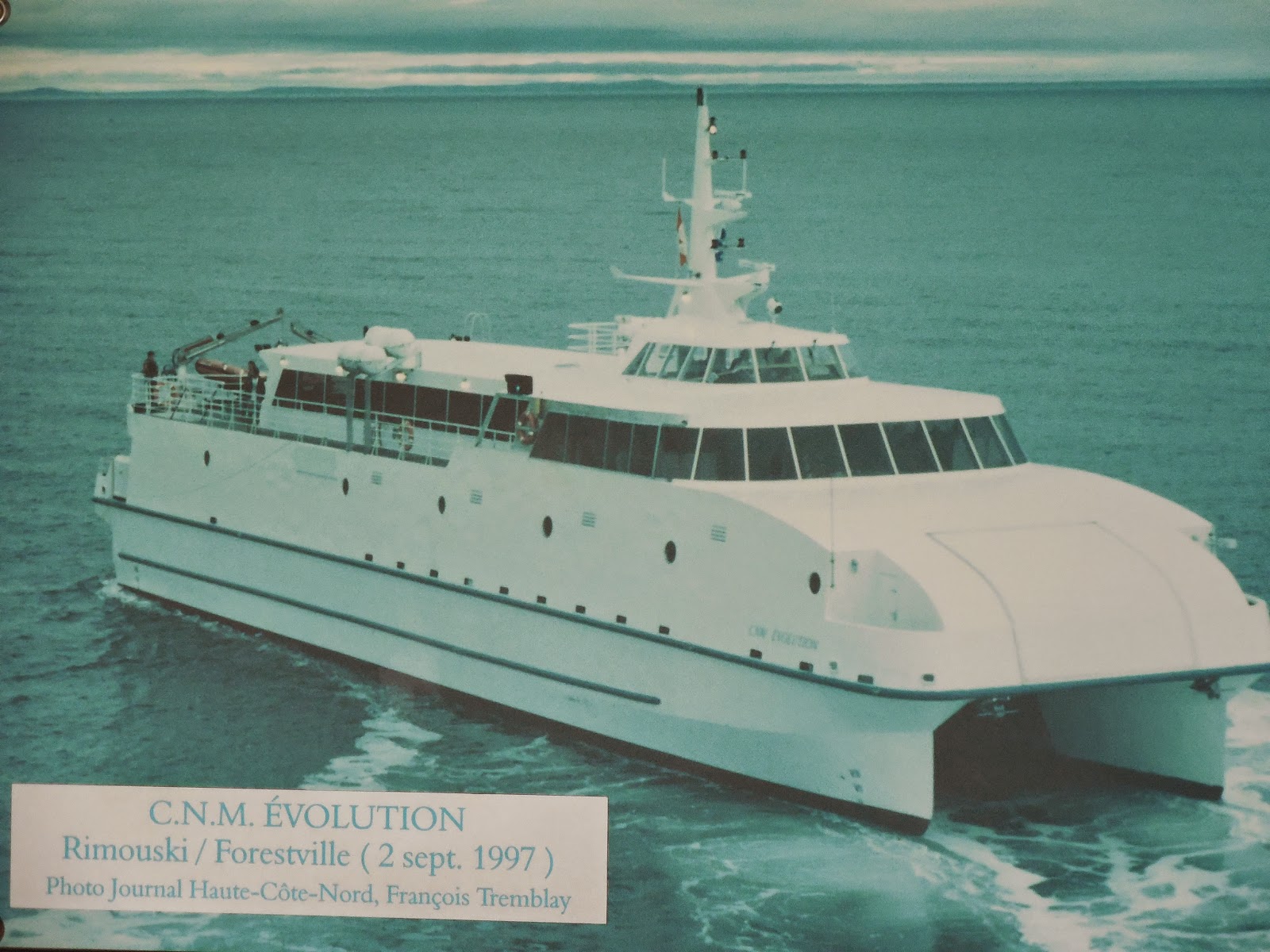 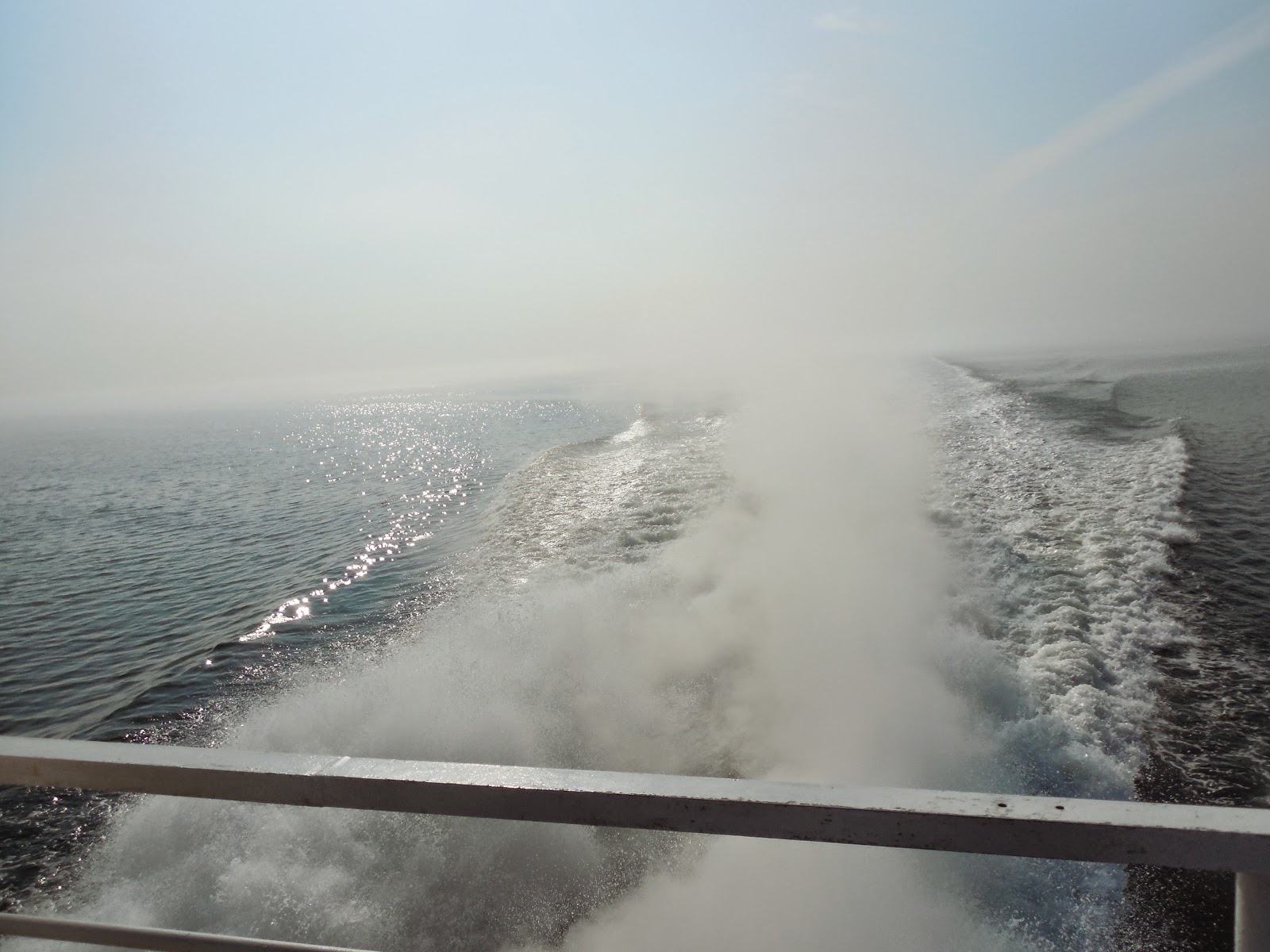 Saint Lawrence River is 50km wide here, and it gets much wider further downstream. I wonder at which point you stop calling it a river? When it becomes tidal? When average salinity reaches a certain point? When you can't swim "upstream" any more? I doubt it's an exact science :).

Landing in Forestville I got on the road right away. Labrador City is 750Km away and I have to get there for the night.

There are some very nice views of the Saint Lawrence from the road between Forestville and Baie Comeau. The area is more densely populated than I expected, so the traffic is a bit dense. Lots of motorcycles coming towards me, so I know I'm onto something.

Indeed I was. Leaving Baie Comeau the road goes North following Manicouagan  River and passes by five hydroelectric power plants. What a road! Uphill, downhill, twist, turn, crest... All one after the other and with excellent pavement. And lakes, oh so many beautiful lakes! There is a bumpy section between Manic 2 and 3, but otherwise continues like that all the way to the magnificent Manic Cinq dam (it sounds so much better in French) at the beginning of the enormous impact crater called Manicouagan Reservoir. 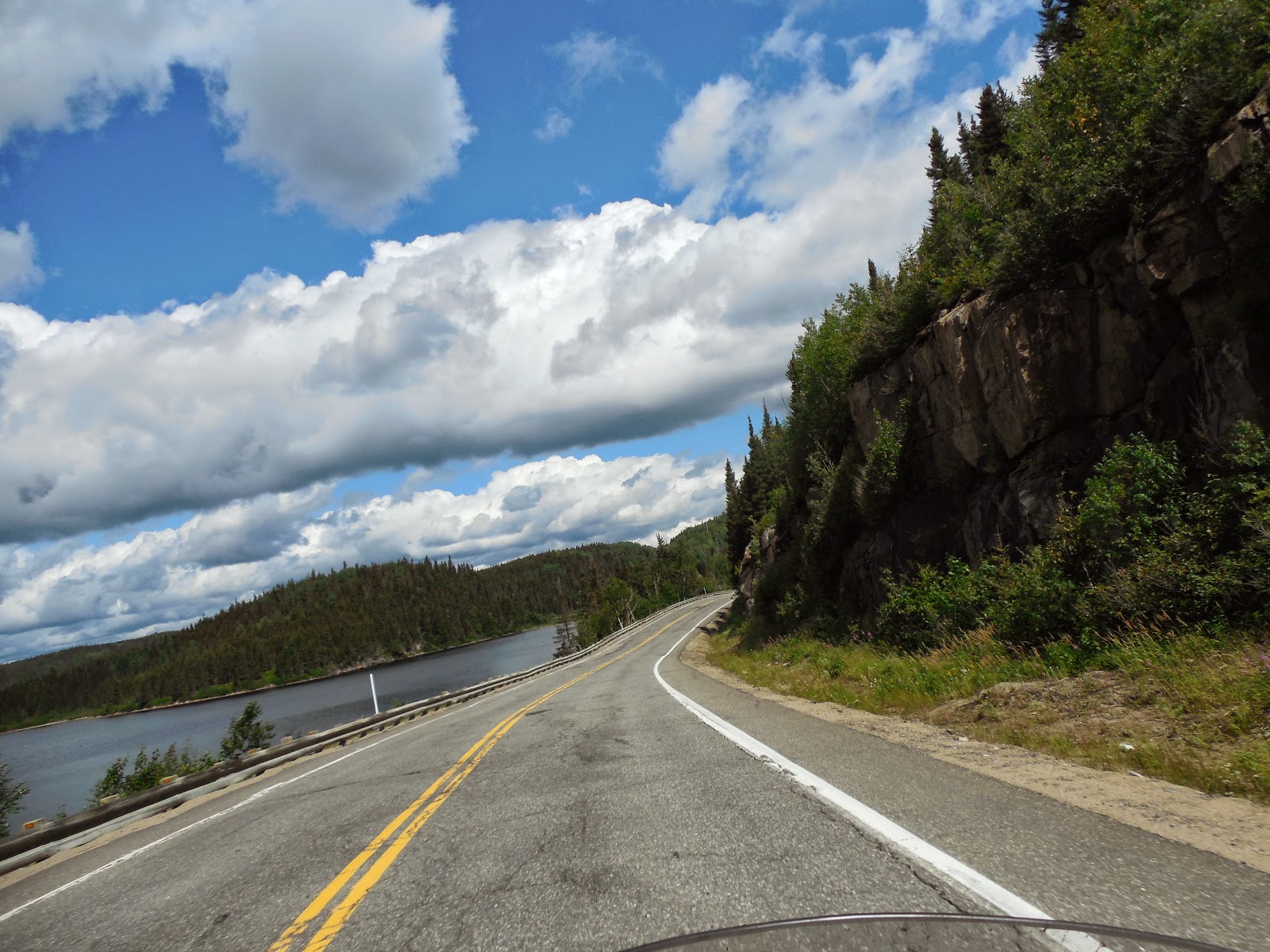 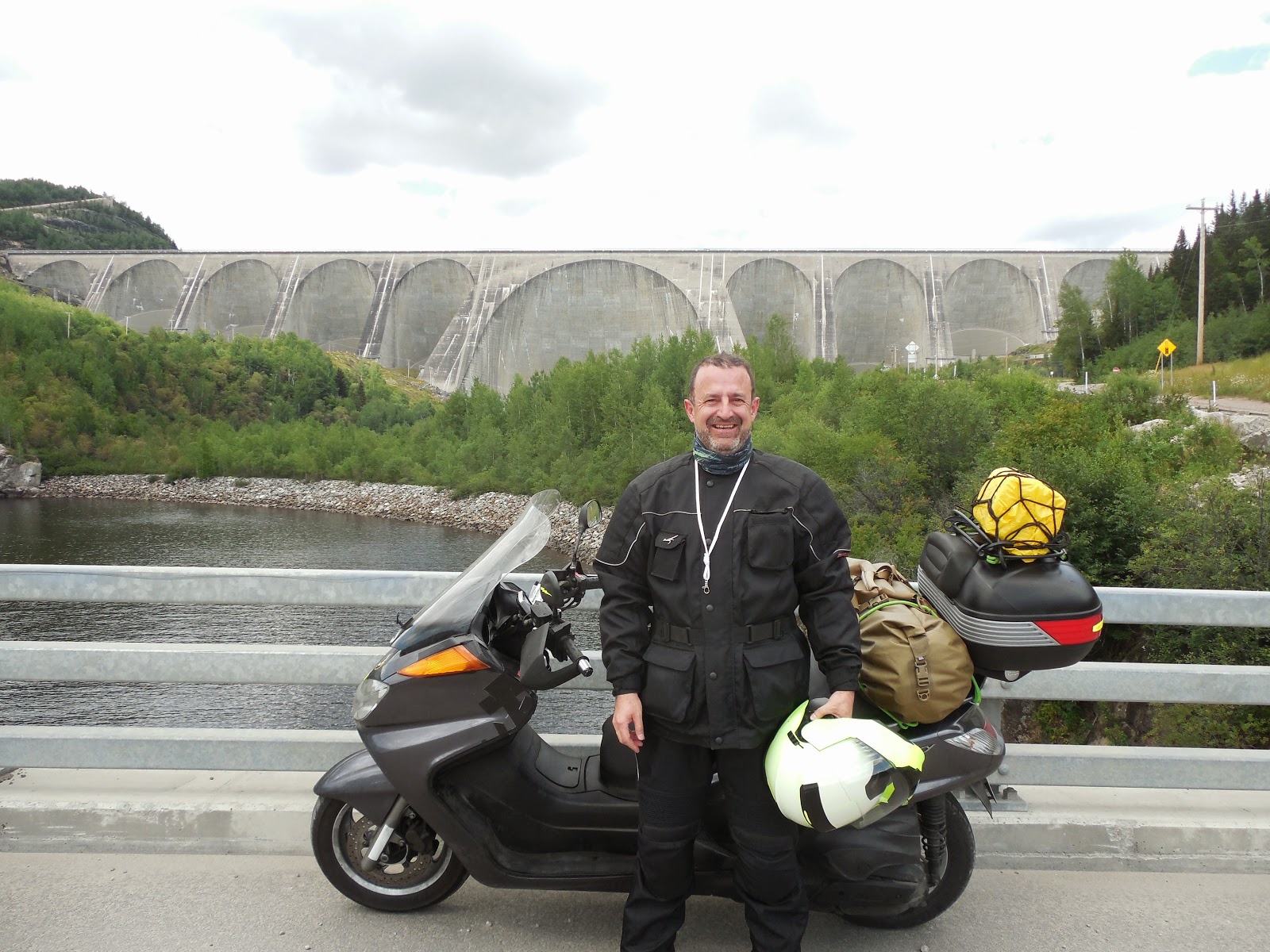 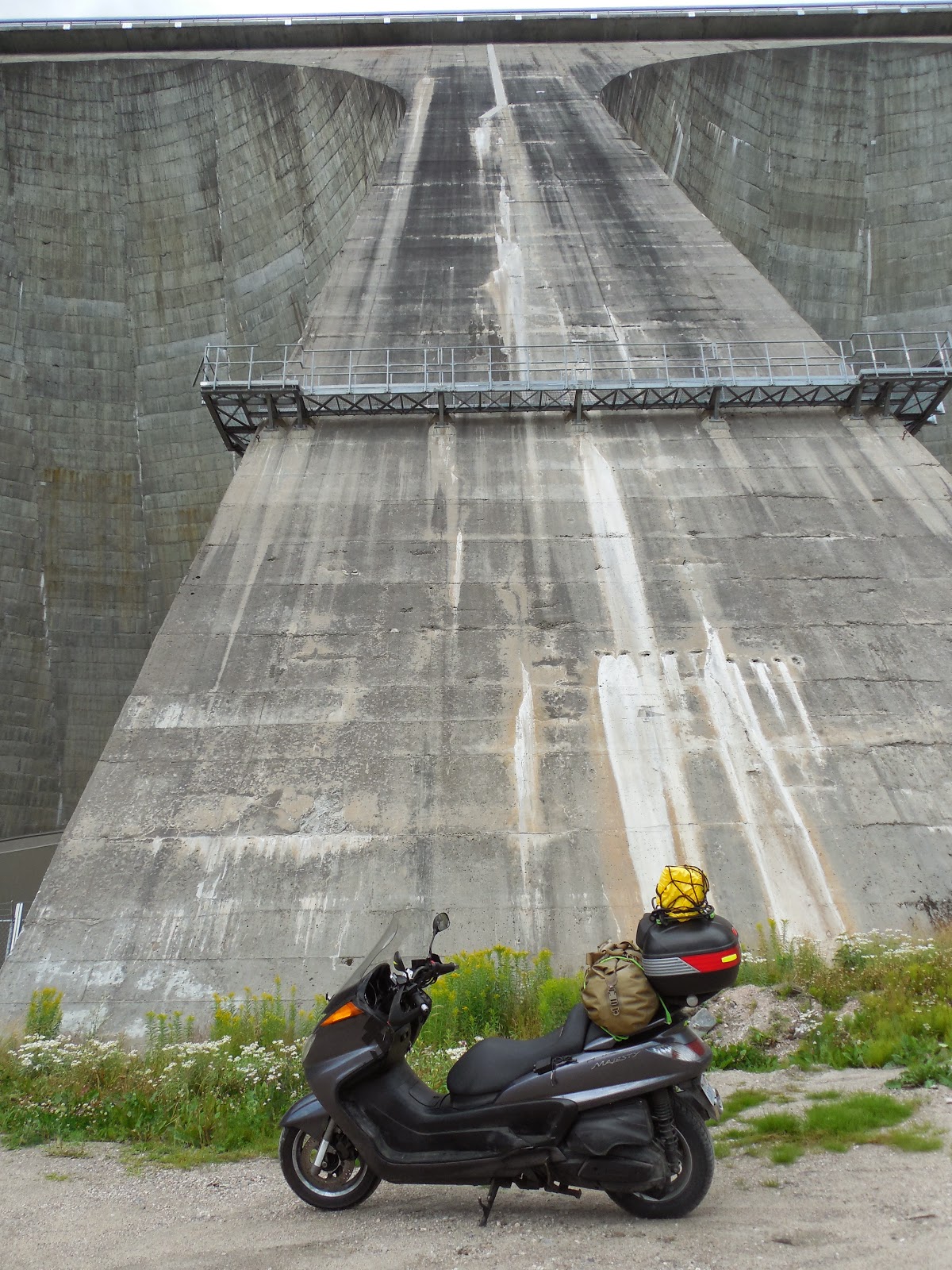 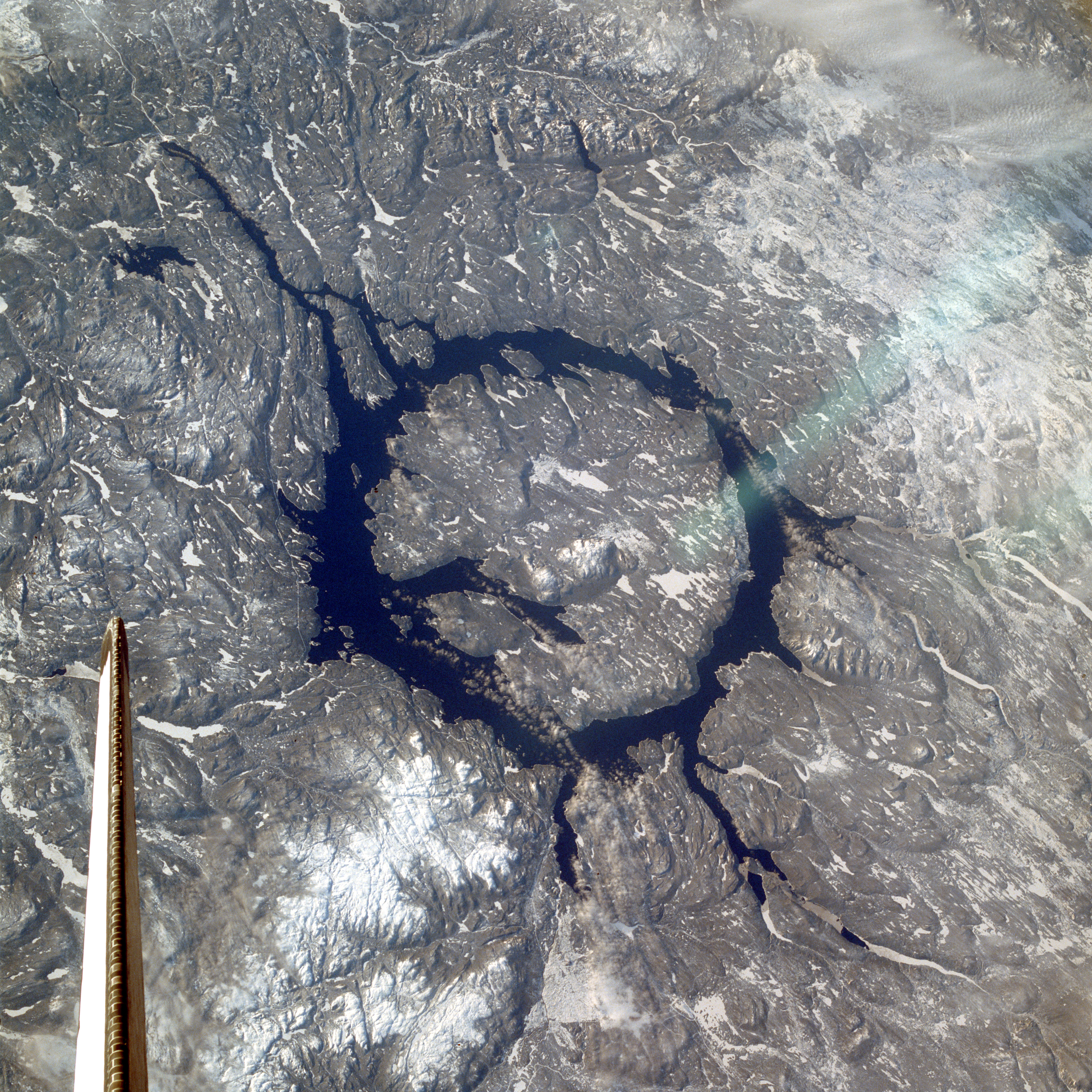 The dam is at the South side of the reservoir (the tip of the bay on the left of this picture taken from space).

There is a free tour of the dam that lasts two hours. Definitely worth the time, but I didn't have any to spare. I'll have to come back some day.

The pavement ends right at the dam. Unpaved section was well packed for a while, but then a few scary wobbles reminded me that I'm not an experienced off-road rider, this is not a dirt bike and those are not knobby tires it's on. Majesty did handle very graciously though, forgiving my errors and taking everything I threw at her in stride. Front tire was floating but stable and rear just plowed, so I was able to maintain speeds of 90-100 with relative ease and in comfort. That is until things got deep and loose without warning, which exercised certain sphincter muscle and pumped my adrenaline. Well, that just slowed me down and caused me to watch the road surface more intently and further ahead. 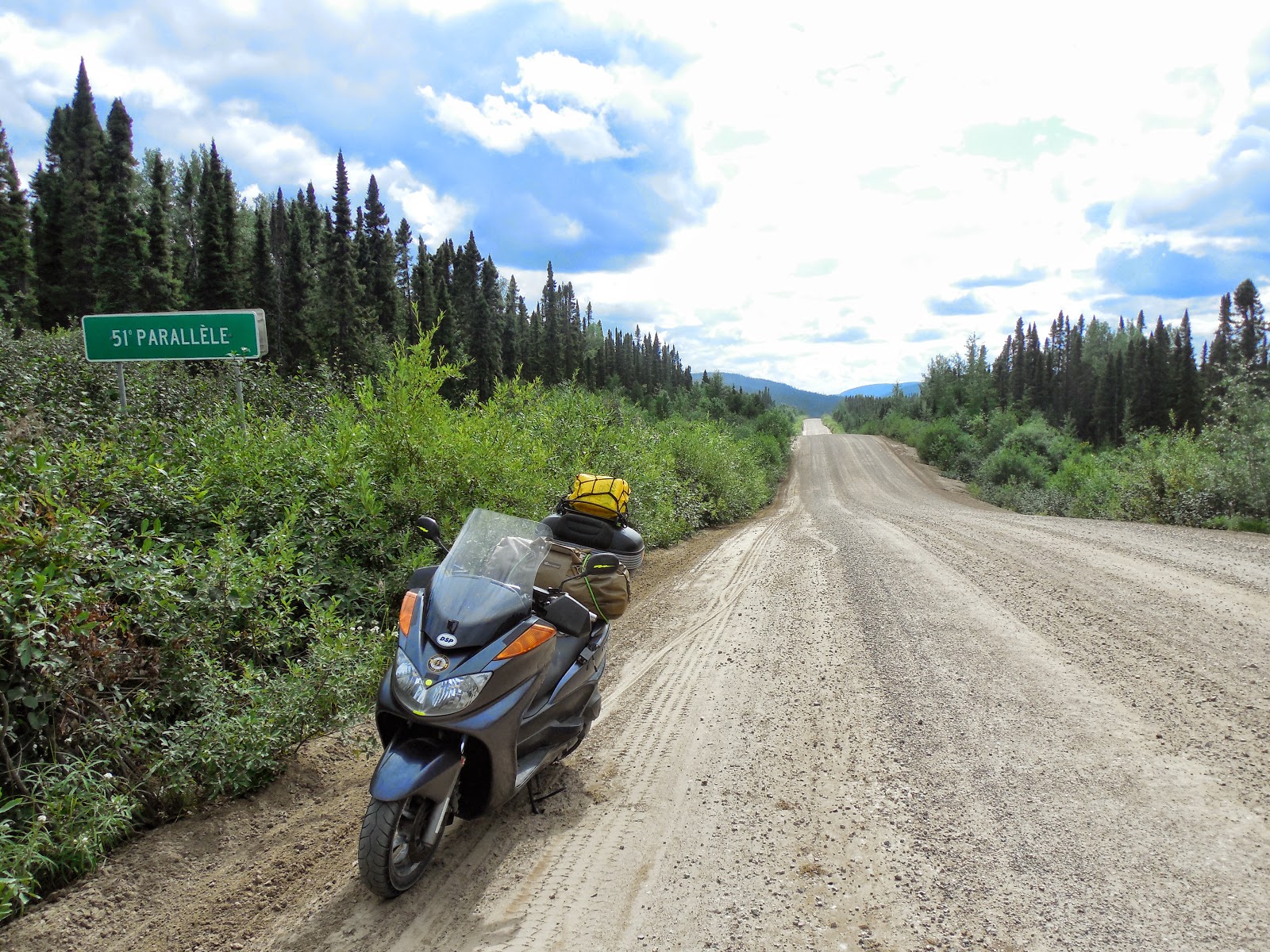 This is where I decided to let some air out of the tires in order to get better grip. 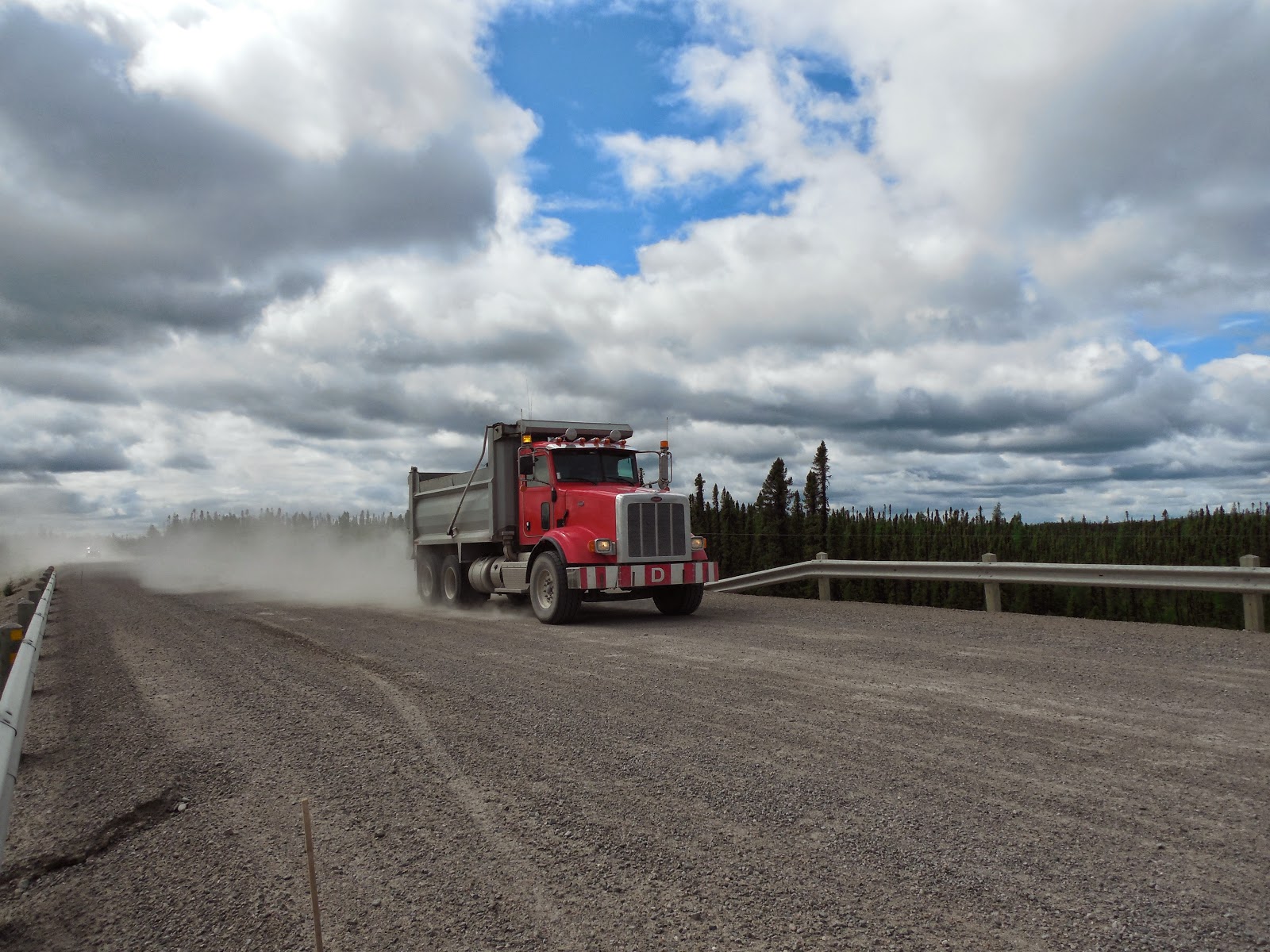 Then along came le camion. They are big, fast and stop for nothing. They are followed by a huge cloud of dust that drags behind them for hundreds of meters. You don't see squat for a few seconds after they pass you and you are lucky if you don't get hit by a pebble, or six. The only thing worse than passing them in the opposite direction is following them. They are practically impossible to pass. They are going only 10-20 km/h slower than I can muster on gravel. Passing with such a small speed difference on a road with unpredictable surface that you cannot see while being shrouded in dust and bombarded with stones... You get the picture. The safest thing to do when you see this in front of you is to stay far behind or take a break until they are gone. 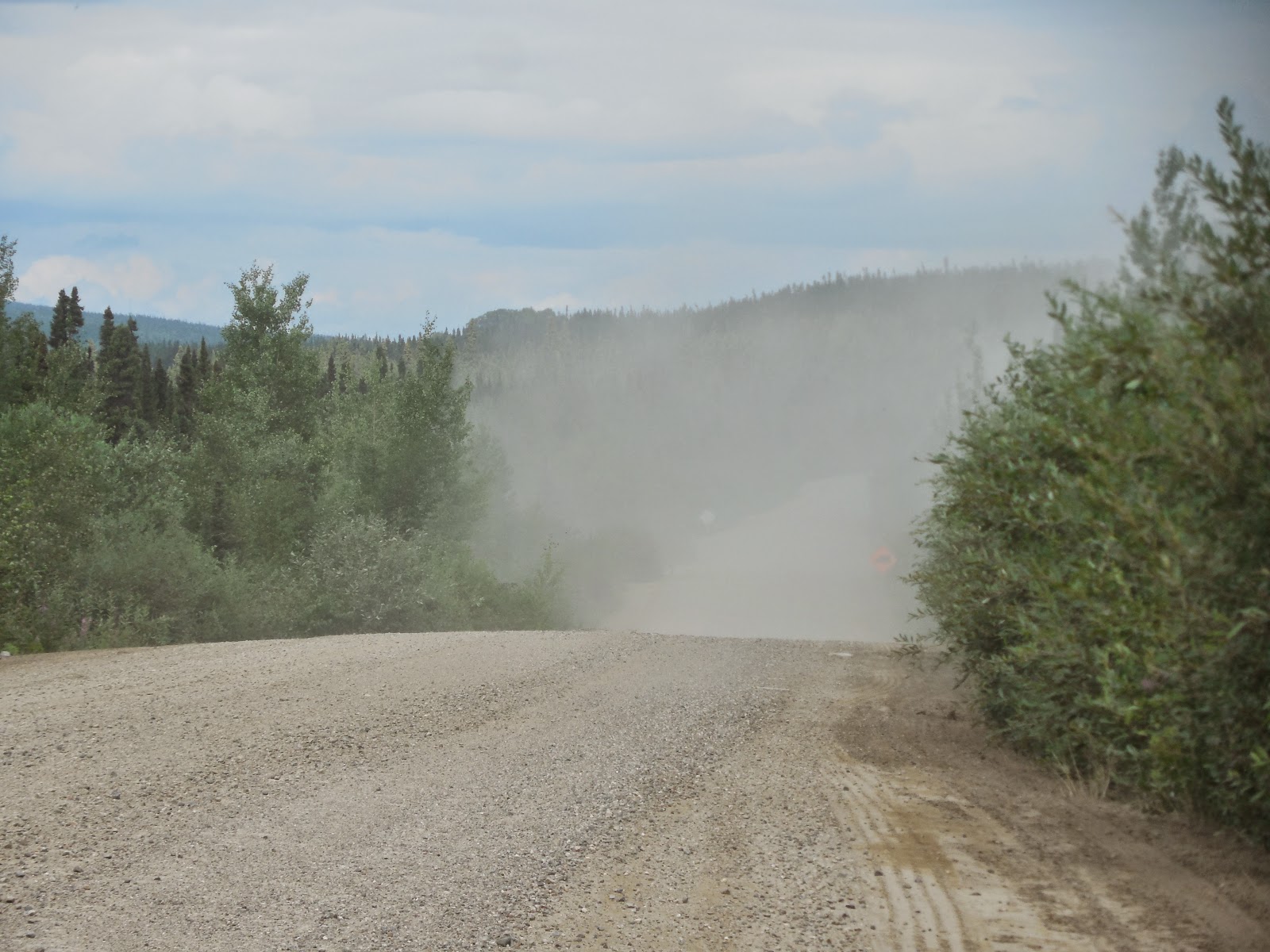 Can you see the truck? Neither could I. It can be several turns and hundreds of meters away.

That 100km was tiring, so when I got on the pavement again I let her loose. The road helped, with long sweepers and no traffic. I held it flat out for a while and it handled even better with tires deflated for gravel (30/25psi). Much less wobbly in the corners than before. Good to know for the future.

Pavement lasted for about 170km and turned back to gravel at Fire Lake. What an ugly piece of road. It follows railroad tracks and crosses them a dozen times. Surface is in all possible conditions except mud, mostly messed up and/or soft. Many sharp corners. Following three trucks and several cars, I ate so much dust I felt like a Bedouin. 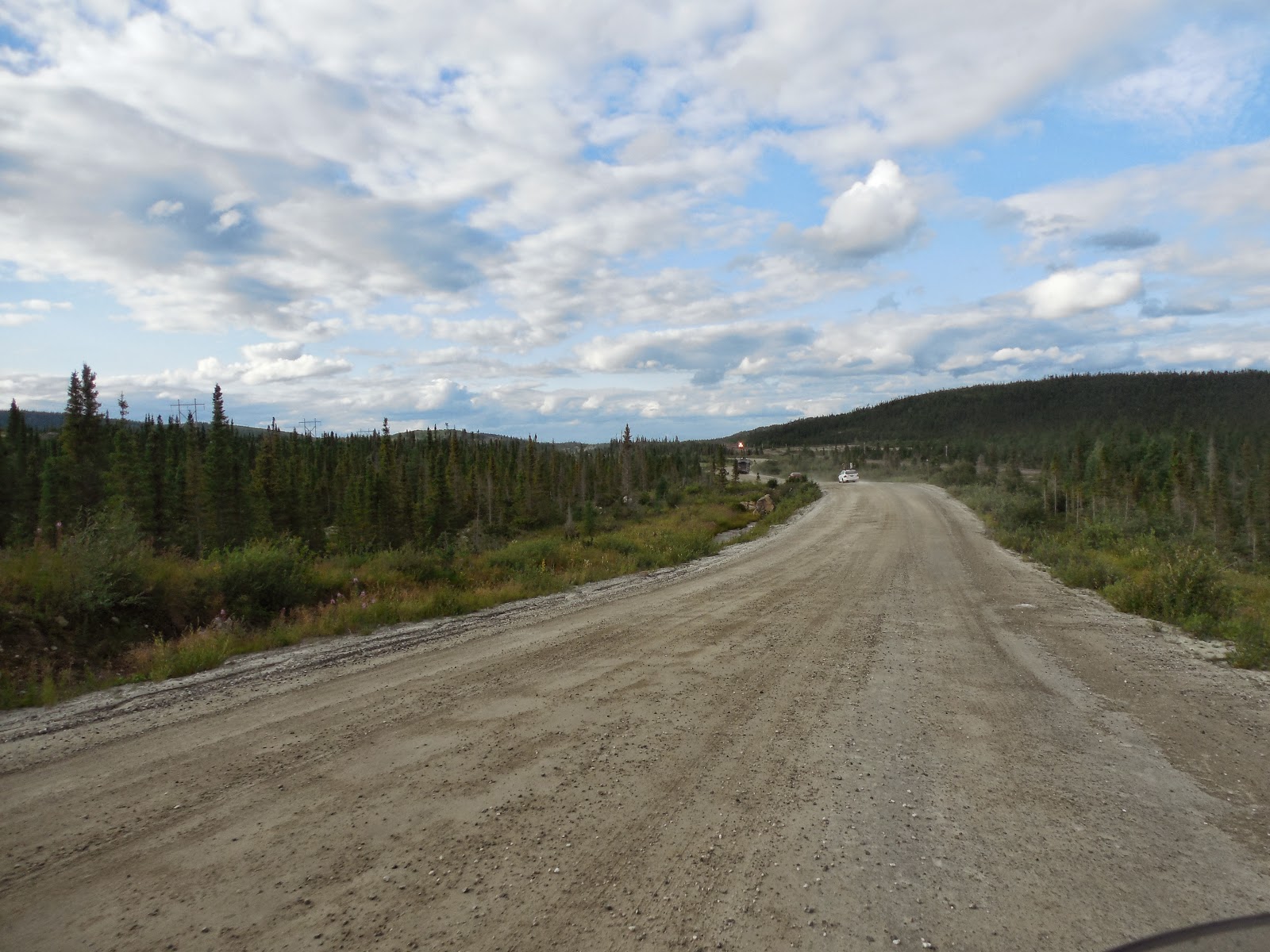 At the end, about 40KM South of Labrador City a new view opens up. Green taiga and lakes are replaced by a huge brown stripped mountain on one side of the road and a similarly sized pile of refuse on the other. In between is a red lake of who-knows-what. This is one of Canada's largest Iron ore mines. The place is a poster child for raping the environment.

The only bright side of this terribly depressing scene was a train operator that have me a big honk as he was coming towards me. 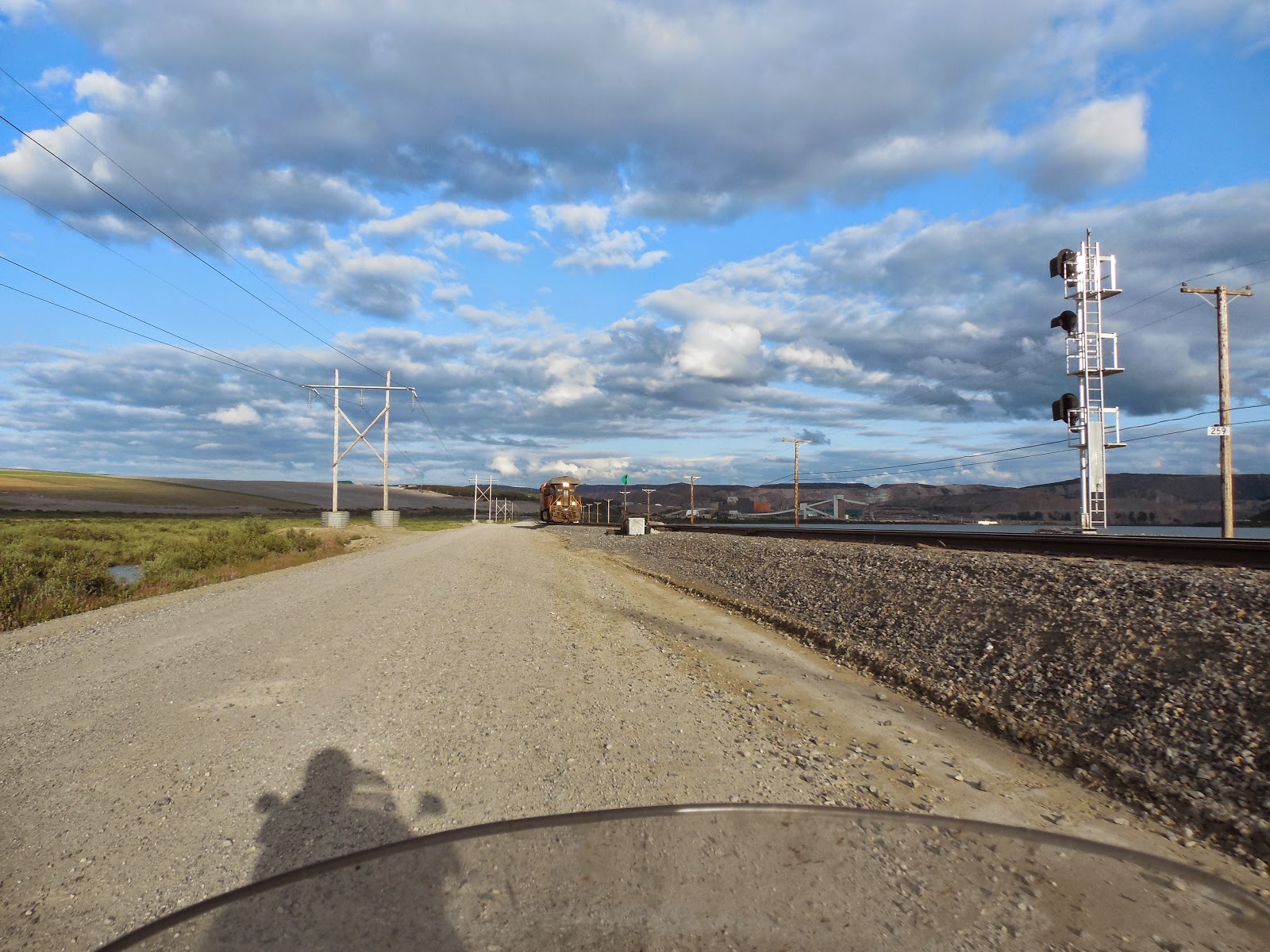 Finally got to Labrador City thoroughly used up. That was ~750km, 200 on gravel.  I have 500+ waiting for me tomorrow. We'll see if I'll be able to make it.
Posted by Vlad