I learned several valuable lessons on this trip and reinforced some old ones.

- I set my own standard and anyone else yardstick is irrelevant. My father was wrong when he taught me to compare myself only to those better than me. It only matters whether I am better than my yesterday self.

However, being exposed to experiences of many other riders got me to ponder several important questions:

- Do I have bigger cojones than them?
- Am I a better or more experienced rider than them?
- Do I ride a vastly superior bike?
- Am I as crazy as a box of frogs?

I concluded that it's probably not one single element, but a bit of everything above combined into a perfect storm :).

- We all have our own type of courage. What is insane to me can be a walk in the park for someone else and vice-versa. I've been called a brass-balled lunatic by people that do things I wouldn't dream of. I have often returned the compliment.

- We are all full of preconceptions, biases and stereotypes that are based on what other people (or often just sales people) told us. Throw all of that away and get your own experience. If I listened to those that told me Trans Labrador Highway is not a place for a scooter, a trip like that should not even be attempted, I shouldn't go alone... Instead, I listened to my inner voice that told me only endeavors with a reasonable chance of failing are the ones worth pursuing.

- The value of moral and emotional support of people you love and trust cannot be overstated. I always found similar acknowledgements pretty cheesy and not very believable, but I hereby stand corrected:

This trip would not be a success it turned out to be if it wasn't for Duda's support. She believed in me more than I did myself, kept me focused and encouraged me to continue when I was close to giving up (yes, there were moments of serious doubt, however brief). If she had any fears, she hid them from me very effectively and managed to disperse mine with just a few supportive and understanding words.

- The best tool on the planet is the one I can make the most of. Giving me a space shuttle wouldn't get me to space any faster than sitting me on a brick, but I just might get there in a balloon, and with much less stress. In other words, I don't know how to power-slide in gravel corners so I don't need a bike that is designed with that in mind. I can get where I'm going faster and with more fun on a scooter than a BMW GS 1200. And I can afford to leave my bike for scrap and hop on a bus home without braking the bank.

- Attitude towards the trip determines the experience to a very large extent. If you take inevitable mishaps just as a part of the experience you will have a much better time. Trips that go smoothly may be pleasurable, but the tough ones make for much better stories and memories.

My choice of the vehicle has proven even better than I expected. Majesty exceeded all my expectations and performed wonderfully even in situations where I was sure she would prove inadequate. Handling on asphalt with the car tire was rock solid and inspired enough confidence to throw her into corners without hesitation. It was even more surprising off-pavement - very stable, easy to ride and control. It even soaked up the bumps and landed from jumps without complaints. She would only squirm in the deepest of soft gravel at high speed, just enough to let me know I should cool down.

- I'm ashamed to admit that I was less then diligent with bike maintenance once the trip started. I knew Majesty's air filters will likely get totally clogged after all that gravel riding, but she was running fine and I neglected to wash them. I should have also checked the oil level, but I never did because she never burned any oil before. Big but fortunately not too expensive lesson learned.

All in all, there were very few places on this trip where I thought the Bandit would be better suited to ride and many where I realized it would be a huge burden and a potential disaster. As a result, I wouldn't hesitate to take the big scooter on a similar adventure again. I'd even choose it over a dual-sport bike like Kawasaki KLR or an adventure-touring BMW GS. I know very few riders will believe me. I wouldn't believe it myself just ten days ago.

Her Majesty deserves a couple of more pictures: 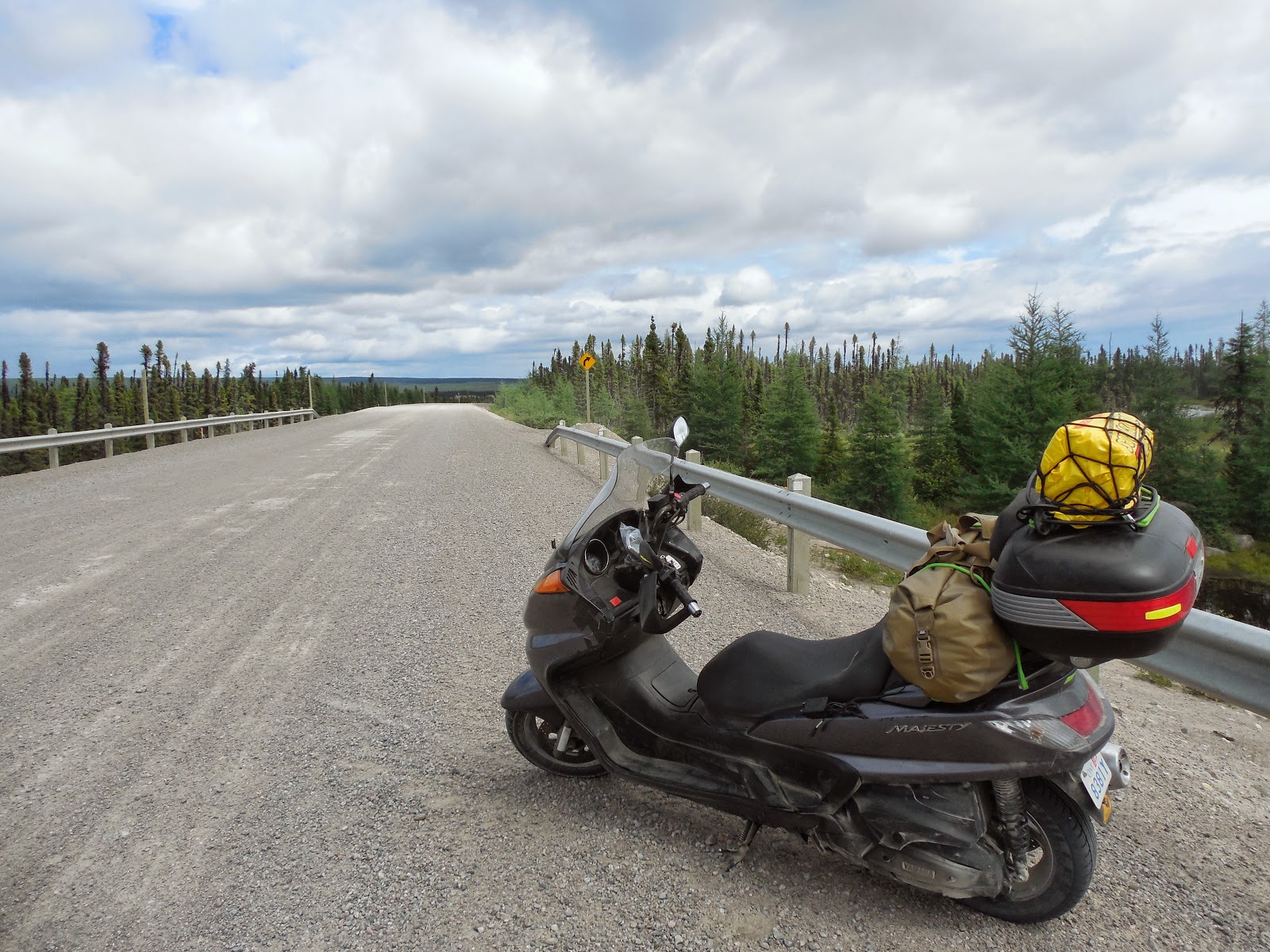 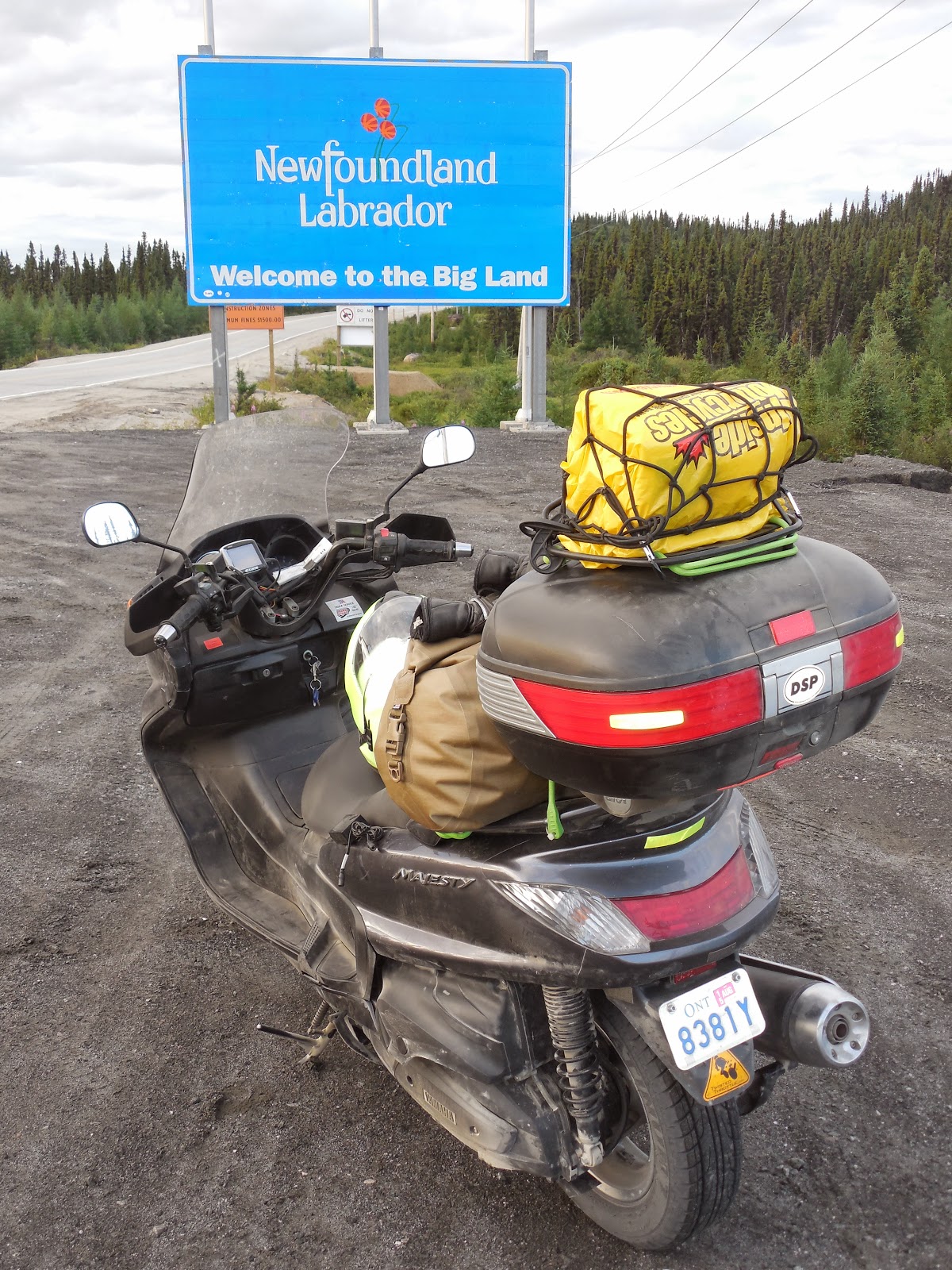