Slept well, on the road before six. It's dark and the full moon is crystal clear. It will be fun to see the sunrise as we are headed North-East. 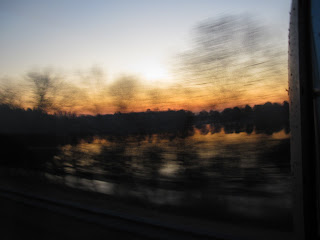 Flooded farmland and marshy forests near Biscoe, Arkansas. Pre-dawn light reflects on water like the land and the sky are waking up in unison. Enchanting. 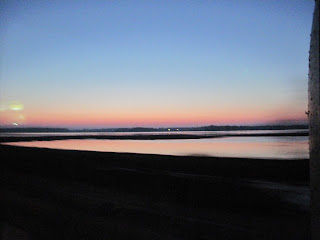 Red sun rising is quite a sight. 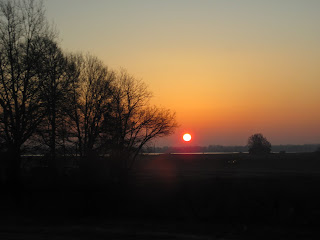 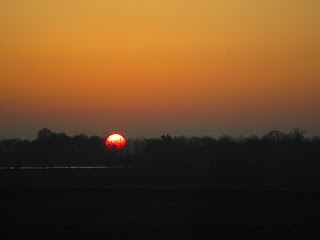 It's much colder than we got used to in the past few days. Time to break out heavy jackets, boots and jeans. Dressing up every time you step out of the truck is a chore, but we don't get out much. It's bright and sunny.

Pulled over at TA truck stop near Heth. Full trucking facility with buffet restaurant, office services, bathrooms, gym... Pumped some air in that empty tire, it seems to be holding it well. Standard pressure is 110psi, but it's hard to check it on a four tire axle without a special long stem gauge. We go by the seat of our pants, or better said by the kick of our boots. 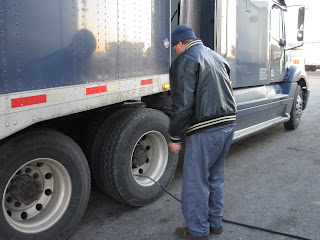 We need fuel more often than the truck, not to mention that we leak more too :). The buffet took care of that. Also faxed some papers for the customs.

This is where old truck tires come to die: 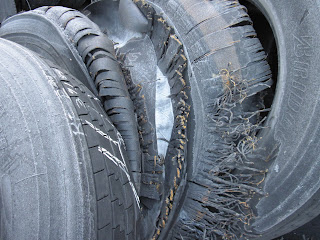 Total fuel cost for this trip will be about $2,500. Almost as much as I spend for gas on my bike in a year, and I ride a lot.

Missouri passed in a snap, Ilinois is now. Mississippi river flooding on both sides of Interstate 57 near Cairo :).

Speeding: Truckers speed too, but on a much lower scale and with more severe penalties. One mile over the sped limit will get you a warning, two miles - a ticket. You simply can't afford a poor driving record if driving is how you make a living.

Passed through Marion, Illinois. An infamous "Supermax" prison is here, if my memory serves me well. 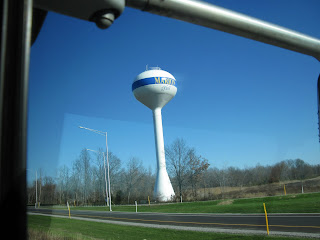 Rest area near Salem for refreshments. Picked up a map of Illinois, a KitKat and a pink lemonade. It looks like Americans haven't heard of ginger ale - I haven't seen it anywhere and got a blank stare when I asked.

The tire we pumped earlier is holding well, as much as can be determined by kicking it :).

The dashboard cigarette lighter socket died this morning. All our electronics are now powered from my laptop that is in turn powered from the DC/AC converter plugged into the socket above the lower bunk bed. It works, but a more permanent solution will need to be found eventually. 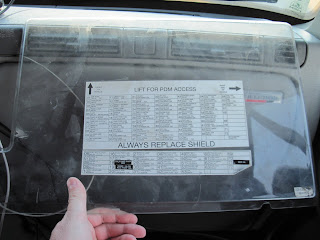 So many fuses and relays,but I found the one for the cigarette lighter socket. It dosn't seem blown which is both good and bad. Good because there was no short circuit, bad because it means the wire is broken somewhere. Not a job we can easily tackle on the road, no mater how many hands I stick in the fuse box. 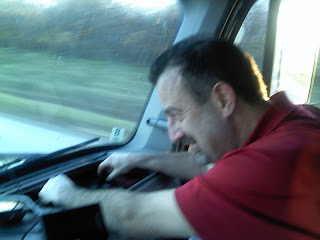 Issues with customs and paperwork. Its the weekend and brokers are hard to reach to confirm that paperwork we faxed earlier is cleared. If brokers don't clear the shipment, it has to go to inland customs facility (providing the shipping company is registered for inbound customs, otherwise it cannot cross the border) before it reaches the customer and that costs time and money. It takes a lot of telephone calls to different brokers and eventually the shipping company's dispatcher. Repeated faxes are sometimes necessary to get things done. After all, there's no guarantee. And they call it "free trade"...

Entered Indiana at Terre Haute. The day is great for driving.The sun is very bright but mostly at our 4 o'clock so it's not blinding.

Brazil, Indiana :). Stopped for fuel, "only" 165 gallons this time. Faxed some customs paperwork and grabbed a couple of great foot longs from Subway. 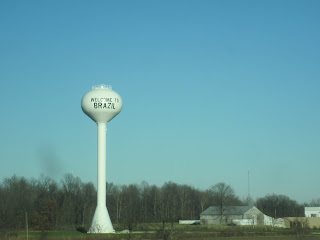 Some paperwork cleared the customs, some did not come back yet. A few phone calls with the dispatcher later and we need to send some faxes again. A lot of time and energy wasted on what should not be driver's responsibility at all. Not to mention that shuffling papers while driving and talking on the phone is not very safe.

Reading a pamphlet Rade picked up in the toilet of Travel America truck stop. "OBAMA HAS  APPOINTED MORE TZARS THAN WERE IN COMMUNIST RUSSIA" it says among other stupidity, copied verbatim. This country is going to hell in a hand basket if morons like that are allowed in the vicinity of a Caps Lock button.

The FedEx depot and airport in Indianapolis is huge. Dusk.

A truck with a prominent sign reading "Balkan Ekspres" on it's side window :).

The moon is rising in it's full glory. I hope some of the pictures and a video I took from the big wobbly are going to turn out useable.

The binder that never leaves this truck has 22 documents in it.Every single one of them is mandatory, from the International Registration Plan Cab Card to the International Fuel Tax Agreement (IFTA) license, to the Annual Inspection Certificate. At the end are registrations of all the carrier company's trailers.

Traveling towards the full moon on a clear night...

Stopped at Pilot for another round of faxing. Picked up a Pilot/Flying J frequent fueler card (might come in handy on my motorcycle trips - I've developed a taste for truck stops :) ), a couple of free trucker magazines and a special trucking edition of the new testament (I'm very eager to read what Jesus said about trucking).

Wow. I haven't seen the moon this bright since I was reading under it on sentry duty on the Adriatic island of Vis some 30 years ago.

Interstate 24, Ronald Reagan Expressway. My GPS says we'll be at the border at 11PM, and so does Rade. Their estimates were very different before and Rade's was always much better and more optimistic.The catch was in the GPS vehicle setting - once I changed it from "truck" back to "car" it became way more accurate. Someone should tell those GPS software programmers that trucks in North America travel as fast as cars :).

Welcome to Ohio. Smooth sailing for a few hours.

Stopped at the free shop for a break and filling up the customs paperwork for shipments that were not cleared by brokers and are going to inbound customs warehouse in Mississauga.

Crossed the border with no fuss. Secondary inspections for trucks are no fun and last for hours. A sign bu the road says it's -5. We were at 20+ just a couple of days ago, and that was unseasonably cold for the area.

Time to stop blogging and start packing. We are just hours away from home..