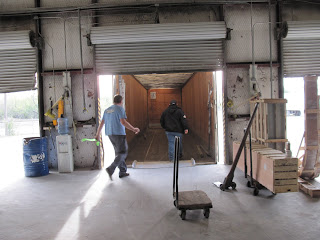 Got something to pick up so we don't drive empty to Canada. Taking Texas 83 towards Eagle Pass / Del Rio. Nice Texas desert with low shrubs, cacti and some industrial crap or the other every few miles. Sunny and warm. We are hugging the US/Mexico border due North-West for a while.


Just crossed Rio Grande after Eagle Pass. There's nothing "grande" about it here, it's about the size of Toronto's Don River. We would have missed it if it wasn't for Rade pointing it out. No chance to take a picture, it went away too fast.

There won't be any cell signal here, so I'm blogging in advance. Towns are few, small and far between and coyotes and rattlesnakes have no use for cell phones.

All of the sudden, in Normandy, a flooded farm field. In the middle of the desert. Mystery. Again no picture, scenery changing too fast.

They grow pecans here by the Rio Grande. We saw a farm that had pecan trees under which they were keeping roosters. Funny, each tree had a little tin roof about the size of a dog bouse under it. Every little rooster has his own house and there are hundreds of them. never seen anything like it.

We saw a fallen eagle by the road. It's a huge bird up close. Unclear whether it was a road kill or natural death.

Crossing quite a few creeks and rivers. Most, even some pretty big ones, dry as a bone. Reminds me of "dry waterfalls" of Death Valley. This is one of the bigger ones - two big bridges over a dry riverbed: 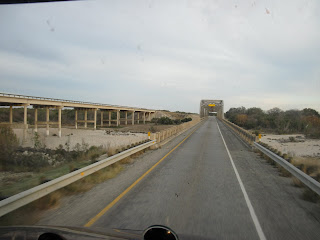 A plane passes across 85 very fast. Military jet. Loughlin Airforce Base is on the right, we can see the runway in the distance.

Loaded three pallets in Fabricas Elena in Del Rio. Quick and easy, friendly folks work here. Next stop, Austin. We are officially heading back home from here. Due North-east, with a few stops in between.

A nice but deserted and apparently abandoned park in Del Rio: 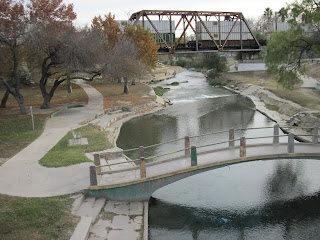 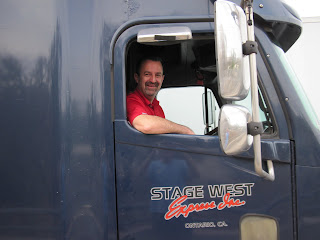 A side note: Border patrol checkpoints are common in this area, even further away from the border. They are not aggressive or obtrusive, but it's still not pleasant when they have a dozen cameras and a drug sniffing dog pointed at you. There's a prominent sign that warns commercial truck drivers that they will loose their license for life if caught smuggling people, weapons or drugs. Well, we have cameras too :).

Many deer by the road. Fortunately, wire fences are solid and high enough, so no one is in danger. Such beautiful and graceful creatures. This is ranch country, but one can see only the entrances. Houses are far away in the distance, if you can see them at all.

Sun is behind our back, setting. Photographers call this "the golden hour" for a reason. Decided to forget the camera(s) and enjoy the view of the desert at sunset. I'm wondering if there's a way to make a living doing this (blogging about travels, not driving a truck - I know that's too hard :) ). Speaking of blogging, I'm getting seriously used to typing from my lap in the constantly bouncing seat :).

San Antonio, the place of the Alamo. A pit stop. The truck has been showing a little leak in the air brake system. Nothing to worry about (the compressor is more than capable of keeping up), just something to keep an eye on, check and fix eventually. The first step in troubleshooting is to determine which part of the combo the fault is at - the truck or the trailer. Rade will do that by disconnecting the trailer and checking the blood, I mean air, pressure. He'll do that tonight or tomorrow morning at the loading dock. 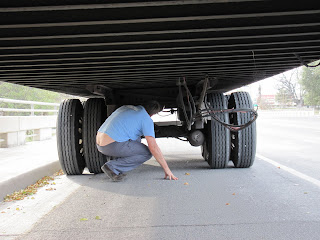 Well, the air leak problem appears to be on the truck, not the trailer as we originally suspected. It's not critical though, as predicted. Not all is bad too - in our efforts to find what is hissing and where we discovered a flat tire and a burned-out marker light (sure, it's just a marker, but a trucker can be fined for it nonetheless). We couldn't find out what pierced the tire either, so the treatment is going to be pumping it up and monitoring to see how big the leak is. For all we know it may have taken months for it to deflate through a slow leak.It looks like we'll be busy fixing these annoyances for a day or so and may be delayed a little, but it's all a part of the experience for me and quite normal for Rade, so we are having a lot of fun joking about it :). 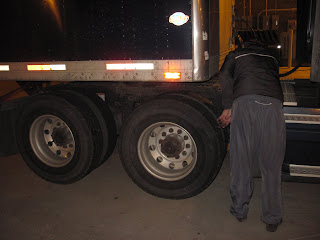 I was about to post some pictures but I'm too tired. Maybe tomorrow. Sleeping in a parking lot in deserted industrial area of Austin. Our natural habitat :). 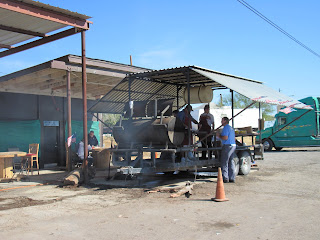 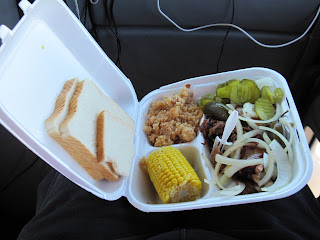