Slept well, rain beating on the roof of the truck cabin all night. Cold by the morning and needed to pee but too stubborn to get up and out, so decided to tough it out. Woke up around 7 to a gentle beep and vibrations from the big diesel warming up.

Rade's brother Goran who left Toronto later caught up with us last night (smaller engine, heavier load). We'll be travelling in a small family convoy (black truck, white truck) to Texarkana, on the border between Texas and Arkansas.

Missouri, a truck stop near Memphis, Tennessee. Rade doesn't have a very high opinion of the food here and he used to be a chef so I can't contradict, but I was hungry enough and enjoyed it anyway.

Towards Little Rock, Arkansas, pretty heavy rain. Looks like some truck was bouncing between guardrails and plowing the field repeatedly. No sign of him though. Stop and go traffic for seven miles, radio says. Rade predicts an hour lost here and I trist his judgement and milions of miles of experience.

Rough road for a while, they should have fixed this long time ago. Arkansas (Bill Clinton's home state) looks in -pretty bad shape. Almost every river we crossed today is overflowing it's banks and the rain is still falling pretty heavily.

Typing this in my lap as we drive, so excuse an occasional misspelling. I guess it will add some authenticity to the story in the end:)

Rolling full legal speed again (65mph). Rade and Goran were driving in parallel for a while to prevent overtaking in front of a one lane zone. Construction pilons everywhere, no crews in sight. They either don't work on Sunday or their union prohibits working in the rain (it is heavy, I have to admit. Crnogorac brothers are discussing over CB to bypass Arkansas next time - too much construction. Well, they better start actually working because Interstate 40 is in bad shape. 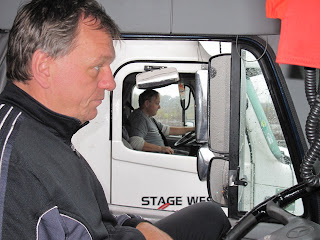 Arkansas still flooded. Both sides of the Interstate. in many places less than a meter below the asphalt level. 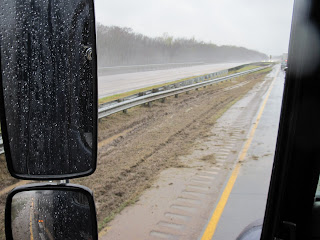 Just crossed Arkansas River near Little Rock. It's shores are bursting. Rain is not letting go yet. 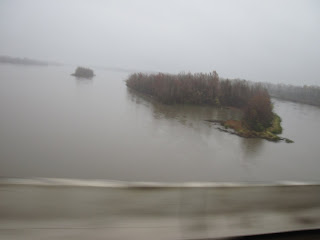 Stopped in Texarkana for fuel. 228 gallons heavier truck, $890 lighter wallet. Bid fairwell to Goran as he continued to Shreveport, Louisiana. We may hook up again on up on our way back. Grabbed a couple of slices of greasy but tasty pica and continued on. Still raining. Entered Texas, planning to stay in Dallas for the night. I hope there be InterWebs there, starting to feel a little silly for writing a blog no one has read yet :) 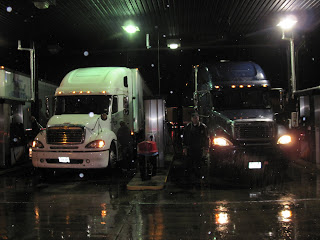 So far, about 1,100Km through non-stop rain, mostly showers with some lightning too. I don't think I ever travelled this long without seeing a dry patch or a piece of blue sky. We are heading southwest and the storm front is moving north so we should be out in the clear tomorrow, just on time to enjoy Texas scenery. we'll see.