Well, stole another day from oncoming winter, and a memorable one indeed. I can't postpone washing the bike until spring now. But I'm getting ahead of myself. Let me start from the beginning:

It was supposed to be a relatively short ride. Just going up to Creemore to check those roads Jesse posted. I planned to be back home by 2PM, so not much else was in the works. Fortunately my mom's flight got cancelled so I had the whole day to goof around.

Started around 10 in the general direction of Orangeville, avoiding major roads after 410. I was in the adventurous mood so I hit quite a few gravel and packed dirt roads along the way. Nothing I haven't done before though - most unpaved roads in the area can be ridden comfortably at 60-80.

Finally got to the part that's new to me. Thanks Jesse for pointing it out, it is easy to miss:

Very nice road and scenery completely atypical for Ontario. Little traveled too. The diversion past Highway 10 was my idea - it's gravel, but very nice.

Sampled some fine Creemore beer and continued on 9 towards Maple Valley. A nice ride too, a little like Hockley Road. 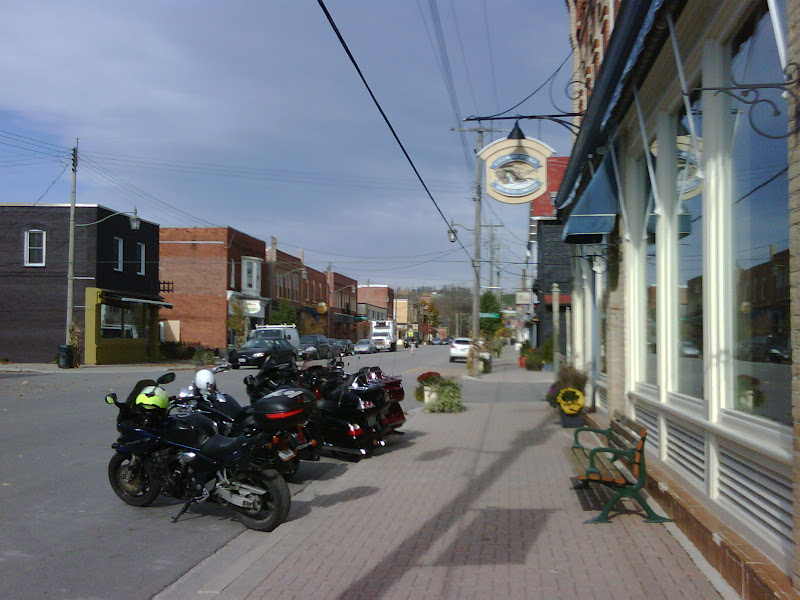 At this point I started to think what next. It was too early to head home so I decided to meander a little and see what other roads in the area looked like, paved or not. First, I turned back to loop onto 9 again, this time on some parallel gravel roads:

That's where it started to get a bit hairy :). No packed dirt or well graded gravel, just a poorly maintained (if at all) rural track that can barely pass for a road. A few soft and wet parts, rough stones, water ruts, etc. I'm thinking this is not a road for Suzy B, but we've been on worse and made out like bandits :). Sure enough, I got out without incidents or scary moments, except that I kept thinking that I really need a damn dual sport :). 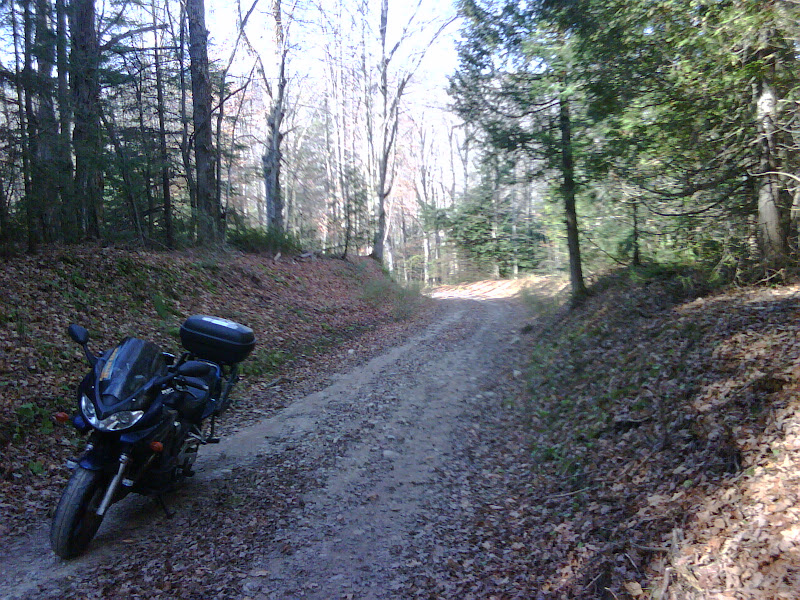 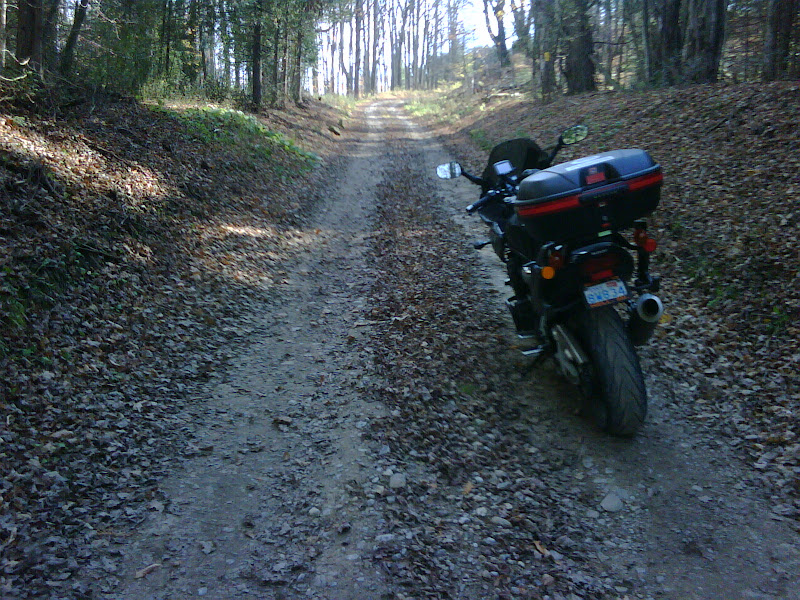 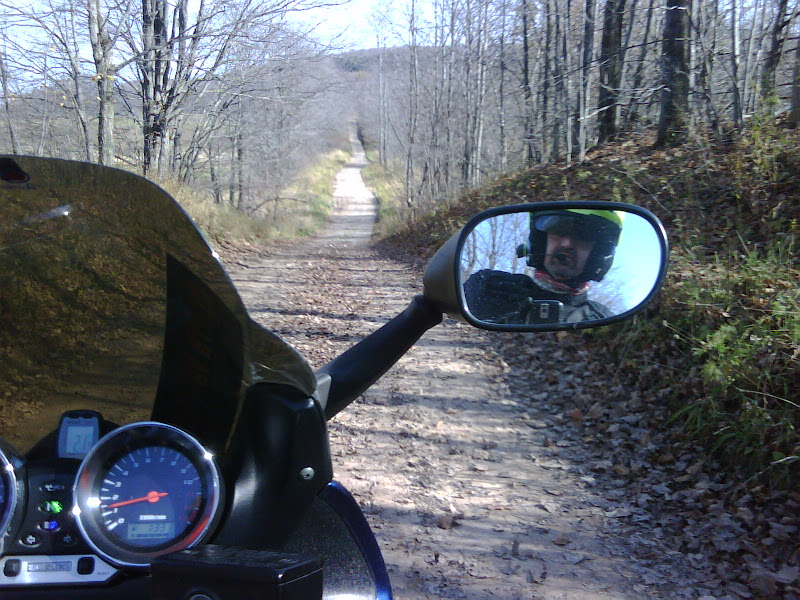 Next was a sweet hop North from Dunedin on Concession Road 8. fast sweepers and log enough to be enjoyable:

I doubled back then, but to make it more interesting decided to turn a few more corners. That's where it got really interesting:

What you don't see on Google maps (or my GPS for that matter) is that Concession Road 6 is unpaved after Riverside Dr. Actually, Riverside Dr. continues as the natural progress of Concession Road 6. It's plain to see when you are there and there's no way anyone would take Conn. 6 by accident instead of continuing on Riverside. Neither did I - I decided to continue on Concession 6 even though it was clearly unpaved and going up a steep hill. Why? I figured it's straight and will just connect me back to asphalt on the other side of the hill (as my GPS and now Google maps clearly indicate), so why not?

Well, it was OK for the first few hundred meters. Going up a hill on a rural road is not that difficult when it's straight and not slanted. There were a few soft spots, but I maintained good throttle control and had no serious breaks in traction. Kept thinking, you can't stop on a steep and slippery hill, but you can't get into a wheel spin either! 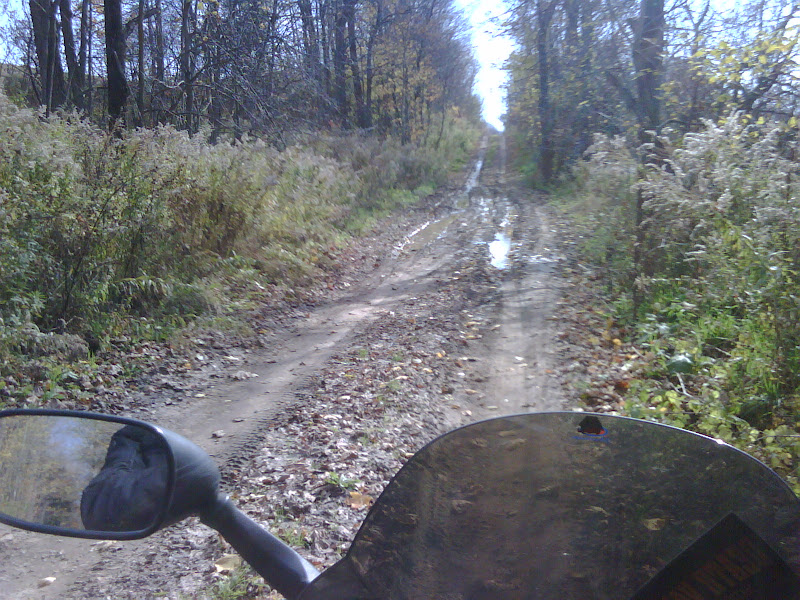 One hill went by and I said to myself I'm glad I won't have to do that again. Little did I know! The mud and puddles came next, some of which I had to pass riding on the very edge of the road that has no visible edge. get stuck in a rut next to the hill side or risk sliding down the other end - pick your poison. Some but-clenching white-knuckle moments later I was out again. I was seriously close to doping it several times but managed to remain upright. It felt like I was on a boat and the rudder doesn't do anything. Making sure I'm easy on the throttle and soft on the brakes and letting the bike wobble as it wants was the only way to go. And don't stop unless you are sure you'll be able to start again. 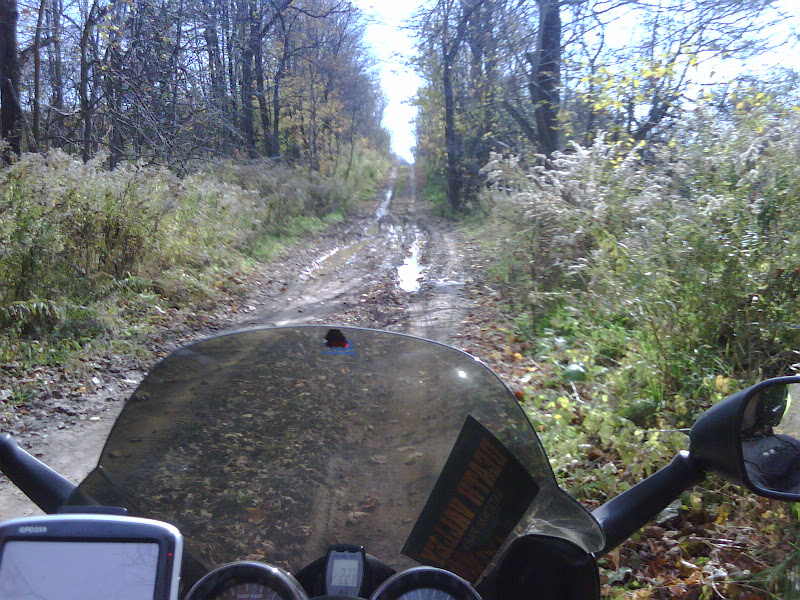 By now, I was way past the point of no return, but I wasn't too worried. According to my GPS, asphalt was under one kilometer away. As I would soon find out, it may have been a hundred! On top of the last hill I was greeted with the even more narrowing road and two large mud puddles that could not be bypassed safely. 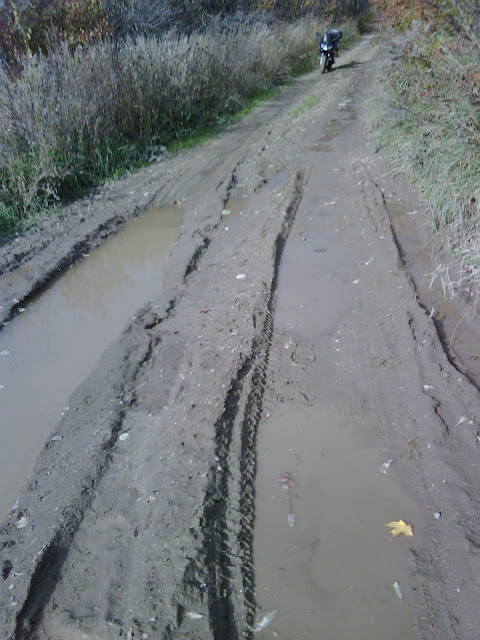 Stopped the bike, dismounted, took the helmet off, scratched my head very hard. WTF now? Let's take a walk to see from up close. the left puddle is not too deep and it seems like the bottom is pretty hard, good. After the muddy part there's a little clearing covered with proper gravel - excellent. The road from there on looks like two muddy pedestrian paths through the thick brush - not good at all. 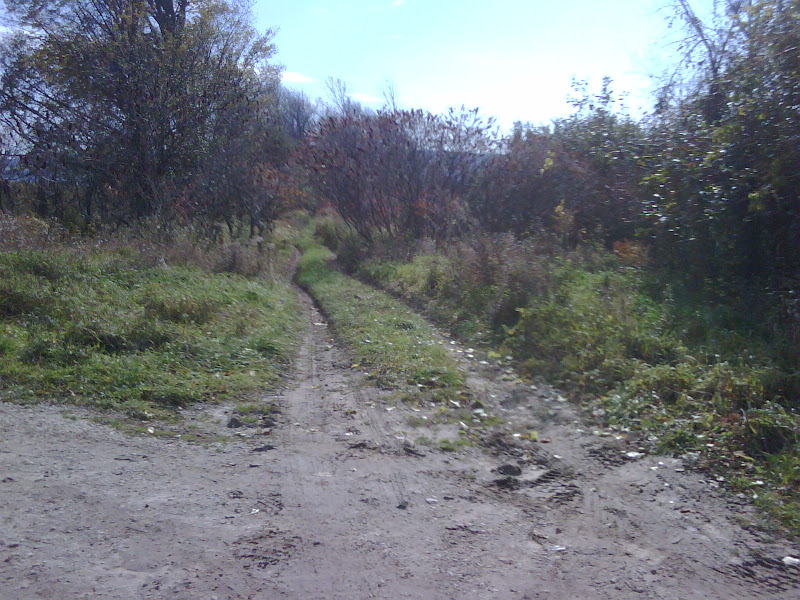 At that point I made a hard decision to turn back and face the same obstacles I already passed again. The alternative was to walk down the rest of that road and see if it's passable. It was too hot and I wasn't about to walk through unknown thick forest without any idea when, how and where I'm going to end up. Known challenges and obstacles won over the unknown, I overcame them once and I can do it again.

Went back to the bike to turn it around. Yea, right. Push, pull, grunt, pant, sweat and got it to about 70 degrees to the road. No way I could turn it around by myself in that mud! Some more head scratching later, I decided to walk up a private road that branched off near by and ask for help. 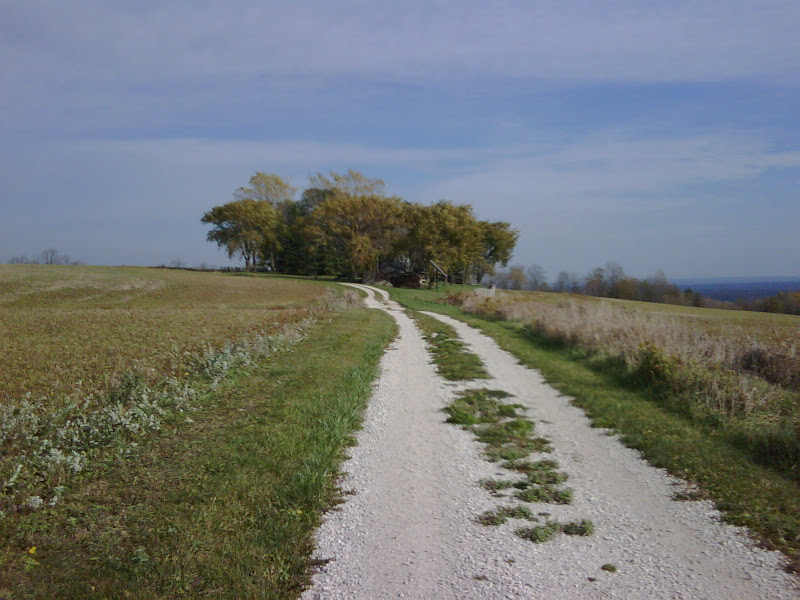 A few hundred meters up, on top of the hill, a beautiful and neat little stone house surrounded by trees and a neatly trimmed lawn. No fence and no need for it. I envy these folks on their secluded digs, but how on earth they get here in the winter is beyond me. Of course, no one is home, it's 2:30 on a school day. 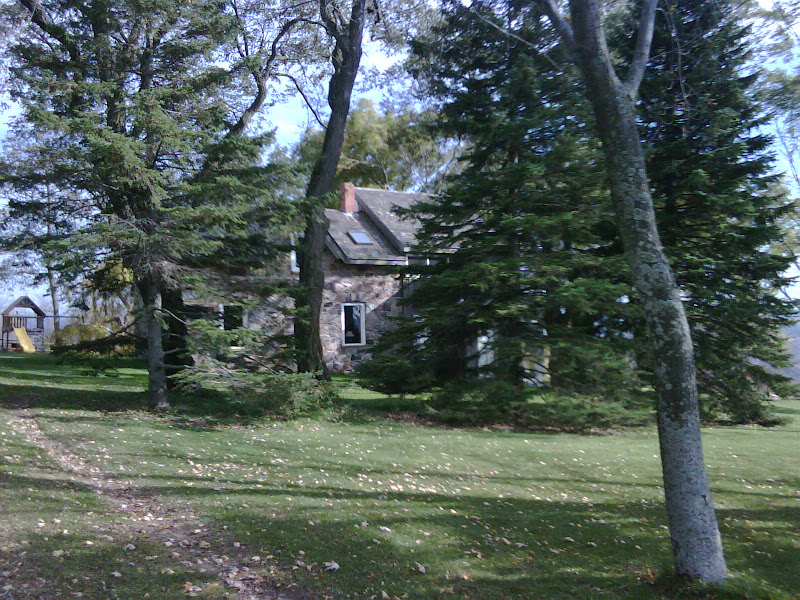 Back to the bike, by this time all sweaty, pretty dehydrated, out of breath and out of ideas. I have very good cell reception so I can call CAA, but there's no way any of their trucks can get to where I am. I can sit there and wait for someone to come by, but for all I know those folks may be on vacation and there's no other house in the area. The road sure as hell isn't well traveled. I wouldn't leave the bike as long as it's still upright and there's any chance of moving it. Very slim chance though, I can't turn it around and there's no where to go forward either. 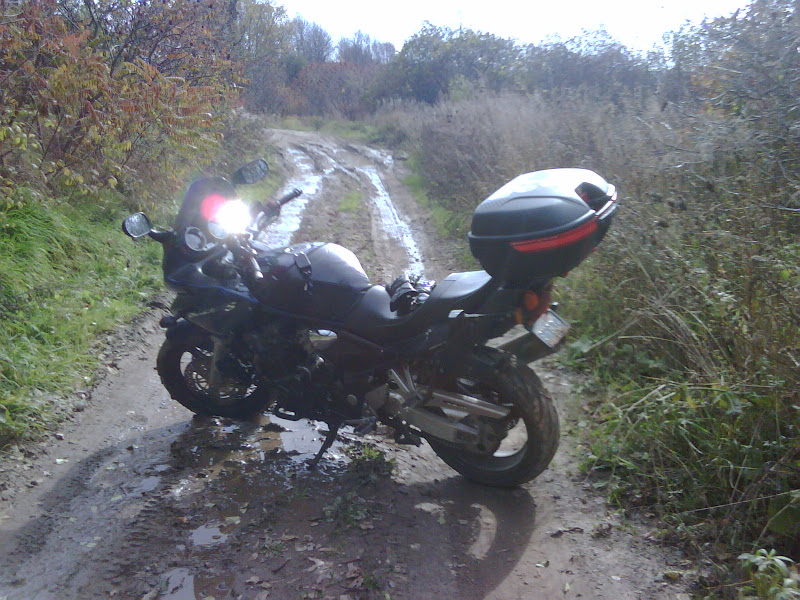 I look at that muddy and puddled stretch again. Leave the helmet, gloves and jacket behind - they'd just be in the way in case I take a dip. Hard but slow, standing by the bike, grabbing the handlebars and digging my heels in the mud, i push the bike to point the same way as before. Clench my teeth, start the engine and slowly but steadily, with no hesitation or any sudden movement, ride through the mud puddle. Once on the other side, breathe a big sigh of relief. Take another look at the road going forward and convince myself I've pushed it far enough for one day. Turn the bike around to face the same puddle and the rest of the calamity ahead again, this time mostly downhill.

There were a few butt-clenching moments on the way down, especially when I had to choose between big rocks in the middle, deep and muddy ruts in the tire tracks and the shoulder of unknown width, depth or existence. It all went well in the end and somehow turned out to pass much quicker than I expected.

All in all, I had about a dozen very good opportunities to drop the bike or worse. All were happily avoided and I don't know what can I thank for that. If I didn't trust my GPS I wouldn't have gone there in the first place. If I didn't believe I can do it I wouldn't... If I didn't have the guts/skills to get out I wouldn't... In the end, this story could only have been better if I reached the other side of that damn road :).

The bike is properly dirty now, to the point that will force me to wash it before winter. Just what I was trying to achieve today, apart from having fun riding, of course :). 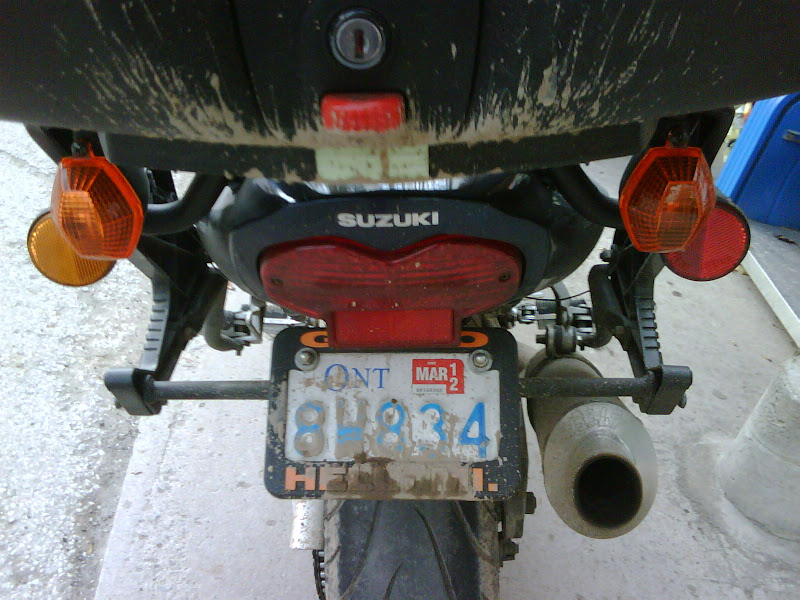