My English is not rich enough to find a proper superlative for a day like today. Heck, not even my Serbian is good enough and this trip has barely started.

The day began after a short but high quality sleep in Anne's Motel in Wall. Woke up like vampires around 5:30 and were on the road before seven. First leg, Badlands National Park was truly amazing, for both the martian scenery and the excellent twisty road. In situations like that it's really hard to pick what to concentrate on and you can't fully enjoy both the ride and the vistas at the same time. We did our best, alternating between some pretty spirited riding and soaking up the scenery.

Exiting Badlands we went through aptly named Buffalo Gap National Grasslands. Prairie it is, but what a prairie! Long stretch of little traveled scenic road allowed us to let the bandits stretch their legs a bit. Quite a bit actually. My bike, more loaded with gear than it ever was before, easily reached 125mph (just a tad over 200Km/h) at which point it started to complain by gently floating the front end and wobbling, like it wanted to say "You have 20kg in your top case alone, have mercy on me!". There were also quite a few suicidal birds in the area that kept flying into our path - I fully expected to hit one, but they all escaped (I guess our reputation travels as fast as we do). The rest of that leg was completed at comfortable 100mph cruising speed (160km/h). As a consequence of pushing a lot of air with what's essentially an aerodynamic equivalent of a brick our bikes were sucking gas big time. I was in deep reserve when Jesse's started to stumble just in time to reach the only gas station in the last 100km or so. It turned out the place has quite a history and we chatted with the owner about it for a while. it turns out "Dances with the wolves" was filmed close by.

A hassle of having to call AAA from where there's probably no cell signal avoided, we continued on through Rapid City (very bleak and industrial looking place from what I could see) towards Mount Rushmore.

Whoever coind the phrase "Getting there is half the fun." obviously wasn't thinking about the monument to American megalomania called MT. Rushmore. He also definitely didn't get there on a motorcycle because the roads to and from there are all the fun. Amazing sweepers to and the mother of all twisty roads I've ridden from more than compensated for the fact that they want people to pay to get close to a defaced mountain here (we didn't pay, of course, but opted for exploring the beauty of Black Hills instead).

Next, Custer national park. One road more beautiful and scenic than the other. Quite a bit of traffic and stopped cars, but our Sena communicators helped in making passing the slow pokes interesting and even fun. it takes some confidence and trust to pass on the inside of a blind corner when the rider in front of you tells it it's all clear, but once you learn how to do it properly and safely it's a lot of fun. I bet quite a few minivan drivers that we passed thought that we are totally crazy and suicidal :).

After checking a couple of wildlife trails (quite a few wild animals spotted, no Buffalos though to Jesse's dissapointment) including a well groomed gravel stretch we got out of Custer and continued on Nemo road (another sweeeet sweeping turn road) towards Sturgis, passing through another aptly named place - Deadwood. The hills (mountains by Ontario standards) surrounding Deadwood are full of tree trunks void of branches and leaves. Like there was a forest fire, except there is no trace of charring...

Got to Sturgis relatively early, had a good meal in the Loud American and headed to well deserved rest. Jesse just started his soft snore and I'm soon to follow.

The day started and continued to be hot, even through the forests and mountains, dipping under 30 only occasionally. I felt comfortable as long as we were moving.

Just around 500Km, but worth at least four tomes that in my book. Without any exaggeration my best day on a motorcycle ever. It felt like everything is working for us even when it was not. 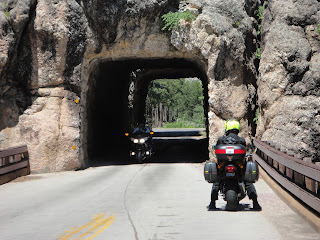 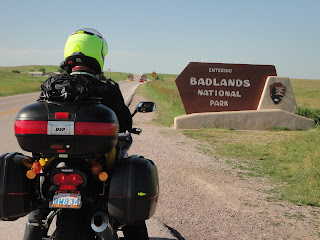