Beautiful as ever, although the road to there (64) was nothing special. Been there, done that. Next time I see the Grand Canyon it will be at least for a week - this is just teasing me too much.

Earlier today, on Route 66 in Selingman I met a gentleman who used to live in Hamilton. He warned me about riding in this area at dusk/night because a lot of elk roaming the highways and byways, especially I40 towards Flagstaff. I said I've never had a close encounter with wildlife except for the occasional bird so I think I'm either crazy lucky, my bike produces noise that scares animals or my deer whistles really work. He said he'd seen those deer whistles on smashed cars in a junkyard, all clogged with deer hair :). He also mentioned that nights get chilly in Arizona, which I acknowledged, but ignored almost instantly thinking "chilly" cannot really be that cold since the whole day was over 35.

Anyway, the deer warning was kept in mind, but Bambi decided to stay out my way through three hours of the dusk/night riding. I just saw an entire family of elk about 50m from the road in the vicinity of Grand Canyon. The whole return was done at pretty high speed too.

The other warning materialized way worse than I could have imagined. As soon as the sun went down the temperature started to drop. By the time I was back on I40 it was very chilly 14 degrees! The last 50Km of this 900Km day were done shaking like a leaf. It took me a whole hour in the shower to thaw myself - I was chilled to the bones. This makes today the day of the largest temperature difference on this trip - the whopping 26 degrees. From 40 in Boulder City to 14 in Flagstaff, from wearing the cooling vest and feeling almost comfortable to bundling three layers under my jacket and turning heated grips on high. I forgot that Flagstaff is at almost 7,000 feet :).

The full moon on the way back was gorgeous. Bright like a lantern, I'm pretty sure I could have ridden without lights if I had to.

Tomorrow? Petrified Forest National Park and then probably Albuquerque. I keep thinking about how Buggs Bunny pronounces that :)) 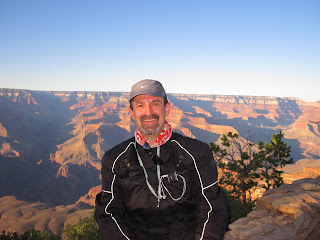