Another day, another time zone

After lunch, we tackled the US Interstate system, jumping on I90 for the next 900Km or so. Ran straight through  Minnesota, crossed the Missouri River (yes, that Missouri), and ended up in a place called Wall in South Dakota.

Despite the relatively boring scenery (some hills, a lot of farmland, a few windmill farms) quite a bit of fun was had today. We killed time by telling jokes, looking for "rabbits" to chase (folks going fast enough for us to go after them) and testing our endurance. Thanks to Giselle's hearty breakfast and a good night sleep at the farm we were in quite a good shape to push some limits. For starters, we decided to pull off the Interstate only when we have to stop for gas, which is around 300Km (my 1200 gets consistently better mileage than Jesse's 650, although not by much - go figure). A couple of small personal records were set, like the longest ride and time in the saddle without putting even one foot down for a stop (just over 300Km and 2.5 hours) and longest ride without braking (Bandits engine brake well and there was no reason to brake for anyone), also just over 300Km.

Jesse stole my thunder by asking first a question I always wanted to ask on a motorcycle ride: "Which time zone are we in?"(we really weren't sure). This is our third time zone in as many days - that's how (and how much) we like to ride!

A good meal in Cactus Cafe in Wall was served by a charming Russian waitress. Jesse fell asleep on his netbook and I had to sneak it from under him :). A glass of wine (it still hasn't turned into vinegar) and I'll be snoring just as well :)

This was a very interesting day. My confidence is back and growing. We can tackle this continent head on. 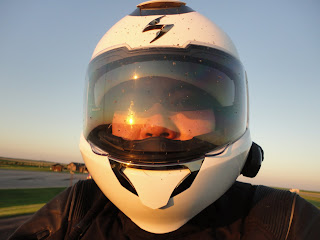 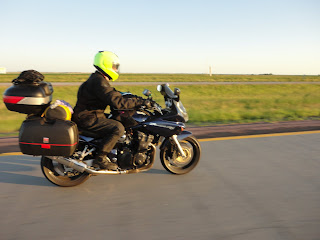